Kingdom of Bones by James Rollins 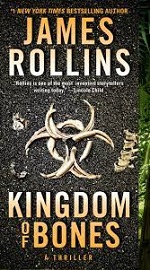 A United Nations relief team in a small village in the Congo makes an alarming discovery. An unknown force is leveling the evolutionary playing field. Men, women, and children have been reduced to a dull, catatonic state. The environment surrounding them—plants and animals—has grown more cunning and predatory, evolving at an exponential pace. The insidious phenomenon is spreading from a cursed site in the jungle — known to locals as the Kingdom of Bones —and sweeping across Africa, threatening the rest of the world.

What has made the biosphere run amok? Is it a natural event? Or more terrifyingly, did someone engineer it?

Commander Gray Pierce and Sigma Force are prepared for the extraordinary and have kept the world safe, vigilance for which they have paid a tragic personal price. Yet, even these brilliant and seasoned scientific warriors do not understand what is behind this frightening development—or know how to stop it. As they race to find answers, the members of Sigma quickly realize they have become the prey.

To head off global catastrophe, Sigma Force must risk their lives to uncover the shattering secret at the heart of the African continent—a truth that will illuminate who we are as a species and where we may be headed . . . sooner than we know.

Mother Nature—red in tooth and claw—is turning against humankind, propelling the entire world into the Kingdom of Bones.

The idea for this novel, Rollins says, was crafted before the recent COVID pandemic. While he debated whether a pandemic novel was needed, I'm glad he wrote it. I appreciate his novels because they have so much information in them, neatly woven into a plot of potential worldwide death and terror. The Sigma Force team is to the rescue yet again.

Rollins identifies himself as a veterinarian turned author and it shows in this novel. There are beasts galore in the jungle. There is much about ants (they have empathy) and jackals and hippos and more. Most interesting was about bats and their unusual ability to harbor viruses. And there is great deal of information about viruses. They are the most abundant life form on earth and can mutate at a blistering rate. (There is a debate as to whether viruses are living or merely self-replicating machines.) I was amazed at the amount of human genes coming from viruses. There is much about the history of the Congo included too. I really appreciate the author's Note at the end of the book identifying fact and fiction.

This is another engaging novel with Sigma Force people attempting to save the world. They have lots of advanced technology and gadgets. The only aspect of this novel less than stellar was the jungle suspense. I felt it was repetitive. I did tend to skim a bit when yet another virus affected animal attacked.

James Rollins is the #1 New York Times bestselling author of international thrillers that have been translated into more than forty languages. His Sigma series combines unseen world, scientific breakthroughs and historical facts into fast paced plots. He lives in the Sierra Nevada mountains. Photo by David Sylvian