The Opus Dictum by Gary McAvoy 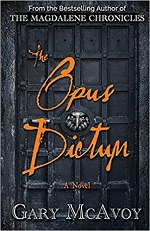 In 1982, Roberto Calvi, known as “God’s Banker,” was discovered hanging under London’s Blackfriars Bridge. What wasn’t found was the briefcase he was known to have had with him the night before, reportedly stuffed with explosive documents blackmailing some of the most powerful people in Italy, and perhaps more.

When the briefcase mysteriously reappears in the Vatican Archives, Father Michael Dominic and his team—Hana, Marco, Karl, Lukas, the feisty Pauline nun Sister Teri, and Dominic’s new assistant, Ian—are up against two powerful and enigmatic organizations, Opus Deus and the secret, outlawed Masonic Lodge P2, who savagely fight for control of the briefcase and its secrets. Their goal? To carry out one of the most dangerous conspiracies the Church has ever faced—all happening during an unexpected conclave to elect a new pope.

From Rome, Italy, to Geneva, Switzerland, join Dominic and friends as they fend off plotters, kidnappers, and blackmailers who have threaded their way into Vatican politics for decades, in a conspiracy known as The Opus Dictum.

McAvoy has given us another great adventure into the world of intrigue around the struggle for power in the Vatican. I like that this adventure centers around an ultra conservative right wing group bent on gaining control of the Roman Catholic Church. It is really believable after the political events we have seen in the U.S. and other countries in the last several years.

Many of the characters in this novel we have seen in previous books by McAvoy. This novel does read well on its own, however. Father Dominic and those on his side desire to have the Catholic Church exist at its best. They come against powerful forces, some within the Church itself.

I like to learn something when I read a novel. In this one, there is much about the operation of the Vatican and particularly about a papal conclave. I also learned about steganography. In the novel, a text document was hidden in a photograph. And that was in the 1980s.

I can tell McAvoy has done an immense amount of research to make this novel as accurate as possible. He says in his Author's Note that he wants readers to feel like they are actually there as they read through the story. I certainly did. I really like his precise descriptions of the Vatican and other aspects, such as restaurants, foods, gardens, etc. McAvoy also tells readers the historical facts upon which he built his novel. He is an intelligent writer and a stickler for details, from weapons to Vatican finances, and that makes reading his novels both entertaining and informative.

I am not sure the plot structure works where the events of 1982 suddenly blossom at the current time. And I don't understand why, after a kidnapping and other attacks, Father Dominic's Swiss Guard friends let him be by himself and unprotected. Of course, suspense ensues. Other than that, this is another good novel from McAvoy.

This is the second novel in this series and the fifth I have read by McAvoy featuring Father Dominic. All of them are good. You can read my reviews of them: The Magdalene Deception, The Magdalene Reliquary, The Magdalene Veil, and The Vivaldi Cipher.

Gary McAvoy began his writing career writing columns for a small town weekly newspaper and articles for a regional Southern California magazine. That laid the foundation for corporate communications work supporting his own and clients' businesses. He was fascinated with cryptology and intelligence during his U.S. Army tour in Germany. Following his military service, he built a number of successful ventures in Southern California and then moved to the Pacific Northwest. You can find out more at https://www.garymcavoy.com/.

Posted by Joan Nienhuis at 6:01 PM