Murder at Greysbridge by Andrea Carter 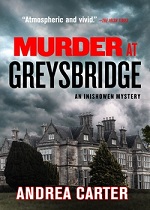 Benedicta (Ben) O'Keefe, a solicitor in Inishowen, County Donegal, attends a wedding at Greysbridge House Hotel. An American guest, not there for the wedding, drowns within hours of the wedding. Then another guest, an Englishman writing a book about the house, is found dead, apparently poisoned. The police are called in and Sergeant Molloy, Ben's ex-boyfriend heads up the investigation. Amateur sleuth Ben is on the case too.

This mystery is part of an ongoing series. It is the first one I've read and felt it read rather well on its own. It has a very interesting setting for American readers. I liked being immersed in the customs and atmosphere of County Donegal. One aspect of the location might be a detriment to American readers as some laws of Ireland regarding petroleum and waste management are essential to the plot.

I felt this was a character driven mystery. Ben is a good amateur sleuth and does most of her investigating by talking to people and thinking out details of the murders. The troubled relationship between Ben and Molloy add a little to the plot interest.

There are a couple of layers to the mystery. On the surface are the murders. Underneath lurks the history of the Greysbridge house, the family that originally owned it and mystery surrounding some of them. Ben figures out some of the cruel history involved in the house's history.

I like to learn a bit when I read fiction and this time it was about poisons. I had no idea the flowers, buds and leaves of hydrangeas were poisonous. They contain a compound that breaks down into cyanide when ingested. It does seem, though, that it would take a great deal of the plant to actually cause death.

I felt some loose ends were left untended even as the murders were solved. The novel contains interesting characters, a good setting, and a mystery that did hold my interest to the end.

Andrea Carter grew up in Laois and studied law at Trinity College Dublin, before moving to the Inishowen peninsula in County Donegal where she ran the most northerly solicitors' practice in the country. In 2006 she returned to Dublin to work as a barrister before turning to writing crime novels. You can find out more at https://andreacarterbooks.com/.

Posted by Joan Nienhuis at 3:42 PM