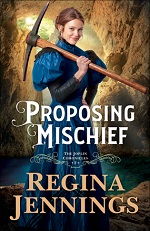 Jennings creates great characters and she has done it again with Maisie. What a feisty gal. And when she comes head to head with Boone, having trespassed into his mine, the action begins and never stops. Maisie is a farm girl and the kind of gal who would rather wrestle than arrange flowers. Both Boone and Maisie have some relationship issues. Maisie has an old beau harassing her and Boone needs to shut down the women after him. His proposal is all business, or is it?

This novel has a foundation in historical fact. It was the time when electricity was becoming popular and it is interesting to read how it is being used. One man was creating a huge amusement park with an emphasis on the lighting. Boone, on the other hand, uses lights to illuminate a cave. The cave has amazing features and is again based on a real cave under Joplin. An interesting issue in the plot is whether people would rather go to a glitzy, man-made attraction or a natural one created by God.

I enjoyed this entertaining novel. Steeped in history, it has a good romance, a serious mystery, waves of humor, and fun characters. It is the second in a series but reads well on its own.

Regina Jennings is a graduate of Oklahoma Baptist University with a degree in English and a minor in history. She's the winner of the National Readers' Choice Award, a two-time Golden Quill finalist and a finalist for the Oklahoma Book of the Year. She lives outside of Oklahoma City with her husband and their children. You can find out more at www.reginajennings.com. Photo: Lane Aday Photography

Posted by Joan Nienhuis at 2:41 PM