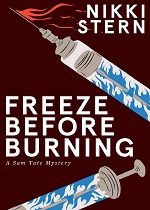 What do a bartender, a priest, and a librarian have in common? They all work in New York City. They’re all true crime fans. And they’re all dead, courtesy of a predator with a chilling approach to murder. Talbot County, Maryland Lieutenant Sam Tate is in the Big Apple to find answers about her own tragic past when she is pulled onto the case of the Dry Ice Killer by an old friend with the NYPD. Drawn to a new colleague, she questions her long-time relationship with her FBI boyfriend. Meanwhile, she’s caught between the demands of an impatient bureaucracy and an especially sadistic sociopath. This may be Sam’s most dangerous case yet—if she survives.

I like the ongoing story of Sam Tate. Even when she is on a restorative vacation she gets involved in solving a murder mystery. Serial killers seem to be her area of expertise and she rises to the occasion again.

This novel is a good exploration of police procedure in a big city. It was interesting to see how the detectives from different precincts worked together. Sam has an interesting role in the investigation, somewhat involved but somewhat independent too. Sam does do something that is a pet peeve of mine, going off to a dangerous situation without telling anyone her plans. Of course, without support or backup, suspense ensues. She even criticizes another detective for going into a potentially dangerous situation without backup yet goes to his aid by herself. (3408/3815) I don't like it when suspense is created that way.

This novel contains a good balance of police investigative procedure and personal relationship development. I like that Sam's investigation of her personal history is ongoing but is a side issue, not detracting from the current murder investigation. I like how this murder investigation is wrapped up well but we are left with a tantalizing hint as to Sam's next adventure. Bring on the sequel!

This is the third in the Sam Tate series. While it reads well on its own, the earlier novels in the series are good too. You can read my reviews: The Wedding Crasher and Bird in Hand.

Ed Rizzo slid his ample body into the ornate confessional, crossed himself, and pushed a strand of thinning hair off his forehead. “Forgive me, Father,” he intoned, “for I have sinned, although I’m pretty sure God will cut me some slack even if my wife won’t, if you take my meaning.”

At ten in the morning, the sanctuary was deserted. Good. He didn’t need anyone listening to his confession, which he unloaded to the figure who sat beside him in the confessional over the next ten minutes.

Even as he talked, he considered who might be on the other side of the grate. Rizzo couldn’t make out the features of the man. He wondered if he’d landed the new priest. Maybe a younger person would make light of his transgressions, which mostly related to his perfectly legitimate reaction to his obnoxious neighbor, Frank Pagonis.

Rizzo had his justifications lined up. He hadn’t survived more than a year of enforced quarantine with three kids and a demanding wife, never mind the missing paycheck for a while, only to put up with the stolen newspapers, a lawn mower returned with a bent blade, and a television loud enough to wake the dead.

“But when his dog, which, by the way, he refuses to leash and that’s against the law, went and dug up my tomato plants, yeah, I sprayed some stuff on whatever the mutt left. Not enough to kill the animal, you understand. He can’t help it if he has a jerk for an owner. I would have sprayed his owner’s food if I could have. The point I’m making is, the dog got sick, but it didn’t die, okay?”

Rizzo cocked his head, thinking he might have heard a faint sigh.

“Now he’s coming around with a pile of vet bills and talking about suing me. I told him to take his threats and shove them. I tell you, Padre, I am this close to beating that smug face or maybe twisting that scrawny neck of his. My wife claims that kind of thinking is sinful. I don’t think it’s as bad as doing the deed. I haven’t told her about poisoning the dog, but sparing her the details isn’t the same as lying, is it?”

Nothing. The guy had probably fallen asleep. The confessional was stuffy, and Rizzo experienced a touch of claustrophobia. Time to move things along.

“If you can just suggest a penance to perform, I’ll get it covered. Then I can be on my way.”

He stopped talking, suddenly aware of the silence, how absolute and enveloping it was. The noises of the city street outside had receded. He could hear himself breathing.

“Hey, Father? You all right in there?” Rizzo scratched the grill dividing the two sides of the confessional. His head was pounding now, and he felt vaguely dizzy.

“I know I’ve been yakking a lot. How about we wrap this up, okay?” Again, no response. It occurred to Rizzo that the other man hadn’t said a word the entire time. What if the good father had suffered a heart attack?

He hoisted his bulk off the narrow bench and pushed himself out of the tiny space. The other side of the confessional had its own entrance. He rapped on the door, then tried the handle, more out of instinct than anything else. It turned in his hand, and he pulled.

The black-garbed figure sat with head bowed, hands folded in his lap as if in prayer or contemplation. Or asleep. Rizzo put a tentative hand on the man’s shoulder. With a sigh like a punctured balloon, the black-robed figure tipped sideways off the bench, fell to the floor, and rolled like a blow-up toy.

Startled, Rizzo jumped back. Stay cool, he told himself.

He bent over with an umph and put two fingers to the priest’s throat to search for a pulse. He expected to feel cold, not the scalding heat that burned his skin.

“Jesus Christ!” he yelled, forgetting for a moment where he was. He waved his blistered hand in the air and hopped around until a wave of nausea stopped.

With his foot, he nudged the body so that it rolled onto its back. He stared, speechless for once, at the face of the priest. Then he stepped farther back, pulled out his cell phone, punched in 9-1-1, and gave his report to the dispatcher in a calm, measured tone.

He agreed to wait for the police and medical authorities just outside the church. He even accepted the suggestion that he might dissuade others from entering until help arrived.

Without looking again at the body of the priest, Ed Rizzo crossed himself. He walked slowly to the front door, stepped into the fresh air, and threw up.

Nikki Stern is the author of six books, two non-fiction and four fiction. The Wedding Crasher, a 2019 Kindle Book Award Winner, and Bird in Hand, a 2020 Shelf Unbound Notable Indie, are the first two books in the Sam Tate Mystery Series. Freeze Before Burning is the latest. Nikki shares author credit on a series of interactive murder mysteries published by Samuel French. She’s a member of Sisters in Crime and the Independent Book Publishers Association.

Click here to view the Freeze Before Burning by Nikki Stern Tour Hosts.

Thanks for the great review! I will be starting this one myself any day now. :-)

"Sam does do something that is a pet peeve of mine, going off to a dangerous situation without telling anyone her plans." ~ You know, they always do that in the movies too. My husband always asks "Why did they do that?" and I always answer "Because it makes for a more interesting movie. THAT had to happen so THAT could happen. Otherwise it would be a half hour movie." LOL

Sounds interesting. Glad you enjoyed it.