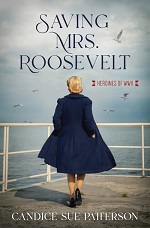 I liked this novel that was both entertaining and informative. It featured a different way women were able to be a part of the American war effort during WW II. The SPARS were women in the Coast Guard. Our heroine is Shirley, daughter of a fisherman in Lubec, Maine. She had been helping her father but when the opportunity was presented to get involved in the SPARS war effort, she did.

I appreciate that the plot of this novel involved danger toward Mrs. Roosevelt. She was a woman helping immigrants, promoting care for Jews and others suffering from prejudice. Some thought harming her would be disruptive for America in general. When the government discovered the traitorous plans, Shirley is sent home to Maine. The Roosevelts had a summer home on an island near Lubec and Shirley was to find what she could as an undercover agent.

The novel deals with several issues including prejudice against Jews, Blacks and women in general. It was interesting to read about the German American Bund, a group of Germans in America up to no good. While Patterson included some good information in her Author's Note, I do wish there had been something about this group.

Patterson's writing style is generally good. The novel kept my interest to the end, providing a good plot with a clear show of romance and a good dose of suspense at the end. There is a pet peeve that Patterson does, however, in ending a chapter with a deadly event then starting the next chapter with everything fine. It is not until pages later we find out what happened.

This is a good novel revealing another way women helped the American war effort during WW II.

Candice Sue Patterson studied at the Institute of children's Literature at age sixteen. She lives in Indiana with her husband and three sons. She writes both contemporary and historical romance. You can find out more at https://candicesuepatterson.com/.

Posted by Joan Nienhuis at 3:30 PM