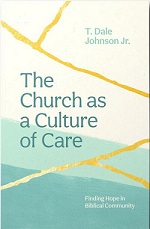 Johnson believes the church is to be the place for soul care for Christians. “God has provided the church with the necessary resources and designs for us to care well for one another with the Word of God, by the power of the Holy Spirit, as we are led by Christ.” (138/2981) The church is positioned and equipped to best understand human problems and minister to the problems of life. (Well, maybe not exactly, as I note below.)

He defines and explores biblical counseling including oversight of God's church, the authority and sufficiency of God's Word, and the work of the Holy Spirit. He notes, “Pastors are called and responsible to care for the souls of God's flock.” (529/2981) “...Scripture places the responsibility for the care of souls on pastors.” (1071/2981) But then he adds, “...God places that duty square upon the shoulders of the elders of his church.” (1084/2981) But wait. The elders have the “particular purpose” to equip the saints for soul care. “Saints are to be equipped to serve the church by ministering the word of God for the care of souls.” (2245/2981) A question that comes to mind is who trains the elders to equip the saints to adequately provide soul care? What does that equipping look like?

I found some of the book a bit puzzling. For example, Johnson says, “Every believer is a counselor.” (2499/2981) He clarifies in saying he does “not mean every believer is called or qualified to do formal counseling with individuals struggling with very difficult forms of sin and suffering.” (2499/2981) He further clarifies the "every believer is a counselor" as in our gestures, our attention, attitudes, behavior, and words. (2499/2981) Yet, he says, God intends that the Word dwell in us so richly “that we are able to counsel one another from his wisdom.” (2499/2981) I am confused. Are lay people, with the sufficiency of the Word, able to counsel one another, or, are we not qualified for “formal” counseling? Johnson suggests a church shouldn't have a formal counseling ministry anyway, unless closely guarded. (2544/2981)

Formal counseling, Johnson says, is like having a specialist called in by a general medical practitioner for a more intense look at an acute issue. (2544/2981) Ah, are we talking about someone specifically trained to counsel? Does that mean God hasn't really provided the church with the necessary resources and designs for soul care as Johnson said earlier? Is it, “God has given us exactly what we need to care appropriately in the moment,” or do we really need trained counselors? (2647/2981) Where do they get trained? Johnson is an associate professor of biblical counseling at a major seminary so perhaps that is the kind of institution where such training needs to happen.

I really like the idea that God has provided for adequate soul care within the church. I was dismayed to find that Johnson added the need for “formal” counseling. I liked the idea of the sufficiency of Scripture with the leading of the Holy Spirit when it comes to soul care. But it sounds like, for tough issues, that really does not apply. “Formal” counseling, I am assuming, by someone trained (and not by the church elders) in biblical counseling techniques is needed.

Johnson notes that this is merely the first in several books on biblical counseling. I look forward to them as I was left with many unanswered questions in reading this one. I could recommend this book be read by church boards as discussion questions are provided. However, I think the book might leave them with knowing what is supposed to be true but with no idea how to get there.

Posted by Joan Nienhuis at 2:16 PM