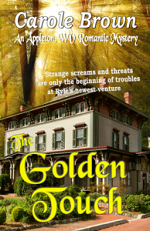 Ryle Sadler stared down at the financial statement lying on his desk. His investment firm had just sent him another record of overwhelming success. Time to sell his share in this stock.

Ryle came from the poor side of the tracks, but that had no bearing on his success in life—which he kept hidden from everyone, especially those in Appleton, West Virginia. But when he buys the local, rundown bed and breakfast, mysterious revelations from beneath the site are suddenly threatening to ruin his good standing with the citizens.

Then along comes Jazzi Sanderson. Jazzi has a reputation of being wild, but Ryle sees more than is on the top layer of this woman. Beneath that tough, wild streak lurks a woman who wants to be loved by the right person, a woman who is tender-hearted and who is just finding out that God is real.

Is Ryle and Jazzi’s worlds too far apart or can their differences help them solve the mystery that lies beneath Ryle’s bed and breakfast? Will the evil person behind it all be able to silence them, or can Ryle’s golden touch prevail in this too?

If you have not read the previous novels in this series you may find reading this one is like coming into the middle of an ongoing story. Ryle is an inspiring character. He loves to help others and has the money to do so. Jazzi is an interesting character. She is trying to overcome her past but is not open about it and that causes much trouble.

The mystery revolves around someone trying to prevent the opening of the B&B Ryle is renovating. I felt the plot was a little confusing on this point. It seems this person wants to keep hidden something dating from generations ago. That motive didn't work for me. A secondary aspect to the plot was Jazzi being in danger. A pet peeve of mine is when a character is overtly threatened (Jazzi) and another vows to protect her (Ryle) yet leaves her unprotected. Ryle does this at least twice. Of course, suspense ensues.

Readers who have been following the series centered in Appleton will appreciate this mystery. Be sure to read the previous novels or you may be confused by some of the characters.

Besides being a member and active participant of many writing groups, Carole Brown enjoys mentoring beginning writers. An author of thirteen, best selling, award-winning books, she loves to weave suspense and tough topics into her books, along with a touch of romance and whimsy, and is always on the lookout for outstanding titles and catchy ideas. She and her husband reside in SE Ohio but have ministered and counseled nationally and internationally. She has found that the traveling and ministering has served her well in writing her novels. Together, they enjoy their grandsons, traveling, gardening, good food, the simple life, and did she mention their grandsons?

When beginning the story of THE GOLDEN TOUCH, Book Five of the Appleton, WV Romantic Mysteries, I needed a KEY factor

Here’s what I knew:

But I still didn’t have that thing—that emotion or feeling—the characters were searching for…until I, unknowingly hit upon it. What Jazzi and Ryle were both seeking, although unknown to either, was a place that felt like HOME. The place that makes a person feel content, relaxed and at peace, even when trouble is brewing, even when you’re still searching for that one person who makes the world go ’round for you.

Where was it? Appleton, West Virginia. The small town where everyone knew everyone and their business, or at least assumed they knew. Where friends were friends for life, even when that small town held secrets, trouble and problems.

Ryle, who was rich, innovative and smart, living in a big town and traveling across the country for work was happy, or thought he was. But when he chanced upon Appleton, West Virginia, small, friendly, clean and sometimes a nosy place, but where friends were loyal and ready to help in any way they could, Ryle realized he’d found that spot that felt like home. Adding that to solving the mystery and finding love, was the answer his heart had craved, even though he didn’t know it.

As for Jazzi, wild, beautiful young lady that she was, felt unloved by her adopted parents, and flew the coop from Appleton as soon as she was of age. What she didn’t realize, that instead of blaming others for her unhappiness, it was of her own making. It wasn’t until she returned to Appleton, more mature now, accepting of her own mistakes, and finding a meaning for her life, that her heart grasped the one place that could ever feel like home. Appleton.

For Him and My Family, December 13

Because I said so -- and other adventures in Parenting, December 17

Thank you for sharing your honest review of this story, it does sound like a good book and series

Carole, congratulations of your recent release of The Golden Touch, which sounds like a great mystery to be solved! Good luck with your book and the tour! Thanks for sharing it with me! Thanks for sharing your review, Books Review from an Avid Reader! Have a magical holiday season!

Looks like I need to read the previous books first.
Thanks for the contest.

I must read this! Thanks for sharing!

Thanks, Joan for reading and reviewing! Reviewers are such a blessing.

I hope you do get a chance to read TGT, megana! Thanks for commenting.

slehan, thanks for commenting. You can read any of the books out of order, but it's so much more fun to read them in order. That way you get acquainted with all the characters as they have their own story. Enjoy!

Thank you, Stormy Vixen, for stopping by. This is a fun series full of romance and mystery. Hope you get a chance to check them out!

Rita Wray, I think you might enjoy this series. This book is one of my favorites but I know what Jazzi was like before... :) So appreciate you stopping by!

Bea LaRocca, lots of people enjoy this series, and I think you would too! Thank you so much for commenting. It's appreciated.

Thank you for sharing your honest thoughts! Mysteries are my favorite genre.