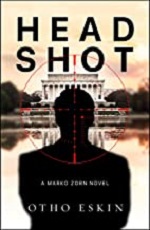 Marko is an over the top hero, rather unbelievable. He knows how to manipulate mobsters and convicts and he knows lots of them. He is arrogant and sarcastic and belligerent and gets away with it. He does jobs for mobsters and government agencies and, by the way, he is a Washington D.C homicide detective too. He can do three operations all at once. He doesn't wear a gun, except when he wears a gun. He is truly a hero very hard to like.

Eskin is an entertaining writer. There is lots of witty dialogue. The novel is full of action. Marko is pitted against the greatest assassin alive. There are several murders and Marko is sure they are connected. He works on revealing the web involved. Part of that web involves an autocratic regime and we get some insight in to the politics involved. There was a twist at the very end that seemed a bit too unbelievable to me.

This is a novel featuring a police detective who forces his way through adverse situations, often without regard for who is hurt in the process. There is not much police procedure as Marko works pretty independently of accepted police tactics. Readers who like an over the top hero who does what he wants will like this novel.

Otho Eskin served in the US Army and in the US Foreign Service as a lawyer and diplomat. He has fulfilled various government roles including negotiating international agreements on seabed mining. He speaks several languages. He has written several plays and one novel. He and his wife live in Washington, D.C.