A Shadow on the Snow By JPC Allen Blog Tour 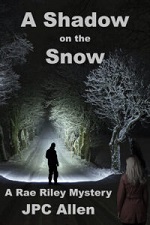 Book: A Shadow on the Snow

Nineteen-year-old Rae Riley can barely believe her gamble paid off. After spending seven months investigating the identity of her father and whether he tried to murder her mother, Rae has been accepted by her dad, Sheriff Walter “Mal” Malinowski IV, and his immediate family with open hearts. And for the first time in her life, Rae is making friends, jamming with three cute cops who play outlaw country music.

But someone is leaving Rae threatening notes, reminding her of her late mother’s notorious past when Bella Rydell wrecked homes and lives during the few years she lived in rural Marlin County, Ohio. Fearing the threats will make Mal and his family reject her, Rae investigates the mystery on her own. But her amateur sleuthing may cost her the father she’s always wanted when the stalker changes targets and takes dead aim at Mal.

This is a good novel with an engaging teen heroine. Rae is intelligent and persistent. I read the short story, the prequel to this novel. It explains how Rae went about the clever but dangerous task of identifying her father. While the facts of that short story are included in this novel, the short story is certainly worth reading.

Allen has incorporated several issues in this mystery of Rae being stalked and threatened. Rae has recently identified her father and his family. The family is a complex mix of people and there are some who don't like Rae. Some in the town think Rae is a gold digger and others believe she is following in her mother's immoral footsteps. Friendship and acceptance are prominent themes. There is a good faith message too.

The mystery is good and I liked the bits of suspense included, especially at the end. There were plenty of suspects and I like how Rae logically tried to deduce who her stalker was. I liked the roles her half-brothers played in the end.

I liked this debut effort. Allen's writing style is good. Though the novel is described as for youth, this elderly reader liked it and will be looking for the next mystery Rae tackles.

JPC Allen started her writing career in second grade with an homage to Scooby Doo. She’s been tracking down mysteries ever since and has written mystery short stories for Mt. Zion Ridge Press. Her Christmas mystery short story, “A Rose from the Ashes”, was a Selah-finalist at the Blue Ridge Mountains Writers Conference in 2020. Online, she offers tips and prompts to ignite the creative spark in every kind of writer. She also leads workshops for tweens, teens, and adults, encouraging them to discover the adventure of writing. A lifelong Buckeye, she has deep roots in the Mountain State.  A Shadow on the Snow is her first novel.

“Write what you know.”

This piece of advice is given to a lot of beginning writers. But many writers are successful concocting stories in fantasy worlds or researching 18th century Russia and writing brilliant historical fiction. I’ve never been comfortable in any genre but mystery, and the more I’ve written, the more I’ve come to write what I know. There’s only one me, and if I pull from my experiences, I hope to give my mysteries a unique touch.

A Shadow on the Snow is set in southeast, or Appalachian, Ohio, because that’s where I grew up. I based Wellesville on St. Clairsville, the town I lived in as a kid. The library my main character Rae Riley works in looks like the library there, and the courthouse is right across Main Street, just like in my novel.

Until I was thirty, my mom’s parents lived out in the country on a ridge between St. Clairsville and the Ohio River. Their home was my favorite place on the planet, so when I needed a farmhouse for Rae’s family, I modeled it on Grandpa and Grandma’s house. I’m sure when my sisters and cousins read about the breezeway that runs between the house and the garage and the steps that lead from it to the outside door to the walkout basement, they’ll instantly know where I got my inspiration.

None of the characters are exact copies of real people I know, but I do use traits of real people to bring my characters to life. Aaron has my oldest child’s enthusiasm for science. Jeanine shares qualities with my youngest sister. Jason Carlisle is based on a man I saw once at my youngest child’s soccer game. All the other dads who coached wore baggy t-shirts and shorts. This man looked like he’d stepped off a yacht with perfectly styled hair, a navy blue windbreaker, and tailored white shorts. In my fictional Marlin County, where most men consider a plaid shirt without a tear to be formal attire, I thought a man who is fashionable would be an interesting contrast to the other characters.

Rae has a lot of me in her. She works at a library, which I did for ten years, but I was a children’s librarian, instead of a check-out clerk. She’s interested in photography and horses like I am. Both of us are shy, don’t like to inconvenience people, and worry what others think of us. However, I have never had the courage or the nerve to set a trap for a stalker, and that experience, as well as the most heart-pounding scenes in my book, are pure inventions. There’s a limit to writing what you know, and as a mystery writer, I’m very glad I can write about crimes without having to experience them!

For Him and My Family, December 26

Because I said so -- and other adventures in Parenting, December 29

Posted by Joan Nienhuis at 5:28 AM

Thank you so much for hosting me!

My daughter will want to check this out!

I love the cover of this one and it sounds interesting!

Cindy, I'm glad you liked the cover. A cover that catches a reader's attention is so important, and it was fun working with the cover designer to create a cover that captured the mood of my mystery.