The Little Town of Summerville 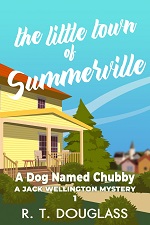 Jack Wellington moves from the big city to make a new start. He jumps at the opportunity to become a detective in Summerville.

A peculiar case is assigned to him as artwork has been stolen and a dog is missing. Fellow detective Charlie Finch, a man adorned with decades of service, uncovers clues with Jack. They become intrigued by the words and actions of a neighborhood boy and wonder how much he might know.

Clues are followed but it’s the kids in the neighborhood who provide the most relevant clues. As the detectives get closer to them with their questions, the pressure of the kids struggle unfolds.

Kids, dogs, thieves, and a detective who meets a gal named Sally in the little town of Summerville.

This is a suspense free, low key mystery. Douglass' writing style is very straight forward. There are no complex nor hard to follow sentences. I am not sure if this novel was crafted for adult readers or young people. There was one particular scene, about building a ramp for sledding, that seemed only for the interest of young readers as it really did not move the mystery plot forward. There is nothing in the mystery I feel would be inappropriate for young mystery lovers.

The novel centers around the details of a police investigation with Jack pursuing leads, mostly by talking to people and reviewing the crime scene. There is lots of description but it is woven well into the narrative. Jack is a low key character who seems to really have a heart for solving the crime. I thought Charlie was an inconsistent character. Sometimes he had a cold stare for Jack but other times seemed to pal along.

There are great lessons for young readers included on truth telling and forgiveness. Adult readers who like a complex mystery with a fast moving plot may not appreciate this novel. I think it suits young readers better.

Jack poured a coffee and reached the back door with mug in hand. He stepped onto the screened-in porch as the twilight of morning brightened the yard. He enjoyed the peaceful surroundings of the porch. It was completely different from the small apartment he left behind a few months ago. He had worked in the Saint Louis police department for five years and jumped at the opportunity to work in Summerville.

He settled into an old wicker chair he’d found at a garage sale and grabbed the tablet lying next to it to get caught up on sports and local news. He was on his second mug when the phone hummed away on the table. He noticed the number was from the police station.

“Hi Jack, this is Captain Ottoman. I need you to get over to 28 Little Creek Lane. Someone was in the house during the night and the homeowner is very upset.”

The captain sounded tired and cranky with no patience for conversation, so Jack didn’t bother explaining it was supposed to be his day off.

“Yes sir. I can get over there right away.”

“Thank you,” and the captain ended the call.

Jack got back inside, buzzed the electric shaver over his face, jumped into some clean clothes, and was out the door quickly. He thought about the history of the town as he drove to the location.

Summerville had been founded during the railroad days of long ago. It was a crossroads of railway tracks built by the Summers Rail & Cargo Company. John Summers became so impressed with the area he established the town and moved his family to the beautiful location with its wide valley and soft hills. Blueprints were drawn for the town which included shops, neighborhoods, and parks, which would enjoy the modern luxuries of the era, and of course, the ability to travel by railway.

Today Summerville still enjoyed the shops of the downtown area, its many parks, and the atmosphere of its small college. A group of businessmen and a strong town council maintained the town with its modest Midwest economy. At times, a getaway for some of the city dwellers to get refreshed by the small-town charm. It was a pretty town, safe and friendly, and Jack Wellington intended to keep it that way.

Jack pulled up to 28 Little Creek Lane as the sun cast its long early morning shadows. Each lawn had its own style, with a tree or two in the front yard and shrubs along the side that acted like a fence. There were sidewalks on the narrow residential street which had gas streetlamps that would shine day and night.

He got out of the car and checked his dark hair in the reflection of the car window. He was above average height with a lean and strong build for a mid-twenties guy, but his collar was crooked. He shook his head, rebuttoned his shirt, and hoped no one was watching as he tucked it back into his pants. A quick check to make sure he had pen and notepad in his back pocket, and he took the walkway across the yard to the front porch entrance. Up the stairs, across the porch, and a few taps on the door. The homeowner opened the door.

“Hello. I’m Jack Wellington from the Summerville police department. Captain Ottoman asked me to come over this morning.”

The homeowner tried to smile, but her eyes were swollen with a sunken tainted darkness around them. Her sterling gray hair looked a bit out of place with a sadness upon her face.

“Yes, I’m a detective,” and Jack showed her his credentials.

She gave a soft grasp of Jack’s hand, “I’m Elizabeth Ashley,” and she invited him into her home. They walked down the entrance hallway and dropped into the living room. Two couches and a couple of chairs formed a horseshoe with a coffee table in the center. The couches faced each other, and the chairs sat on the end with a straight view to a fireplace. She sat on the couch and Jack took a chair.

Robert has an AAS in Microsoft Networking Technology from Glendale Community College and is a Microsoft Certified Professional.

He likes reading, writing, and exploring natural wonders. His favorite pastime is telling tall stories around the campfire.

Visit these other great hosts on this tour for more great reviews, interviews, guest posts, and more!

Thanks so much for the review! Sometimes I like those easy reading, not complex stories. Sometimes I just don't have the mindset for anything complex. This sounds prefect for those times. :-)

It's a very light mystery. It portrays some of life's challenges and the value of a community. Hopefully it sparks some inspiration for the reader!