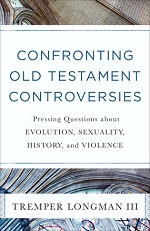 Longman tackles four controversial issues in the Old Testament, evolution (creation), history (exodus), violence (God's), and sexuality (homosexuality). He is clear that this is a book written for Christians, people who believe the Bible is the Word of God. His focus is on how people within the evangelical church have reinterpreted texts to be more culturally acceptable. These are not issues of salvation, he says, but ones open to discussion.

He says his book is for a broad audience. I found his review of some of the literature tedious. Many of the authors I did not know, had not heard of their arguments, and was not really interested in having their views refuted. I felt that part of the book was aimed at scholars, rather than laypeople.

With respect to creation and evolution, Longman firmly believes evolution is a proven science and interprets the creation account in such a way that allows for it. He reminds readers of genre and uses that concept heavily. I was surprised by his understanding of “image of God” and how it applies to humans. He proposes humans in a broad sense and that not all humans are image bearers of God. (1178/5874) He can even explain Paul's seemingly reference to a real Adam individual in Romans 5. Here's his understanding of image of God:

“Here it is important to realize that the image of God is not a quality or an attribute of human beings but rather a status that comes with responsibilities.” (1178/5874) He consults extra-biblical uses of image to conclude, “At a certain point, then, when humans became capable of moral choice and were morally innocent, God conferred on them the status of being his representatives.” (1190/5874) Along with it came the responsibility of caring for the earth, etc. He also presents a few other possibilities. He is firm in saying it is important to understand “what the Bible does teach is not undermined nor contradicted by the findings of modern biology.” (1209/5874)

I was surprised at his comments about original sin but upon thought, they did make sense to me. I appreciated his argument that the exodus has to be an historical event, considering other truths in the Bible hanging on that event. I liked his comments on divine violence. He confesses that he has a sense of unease when he thinks of children being killed in the conquest but notes that his unease does not make him reject the consistent account of God's actions. (3453/5874) I appreciate that Longman says we cannot make God into an image we like (only loving) but must rather recognize the mystery of God's ways. (3463/5874)

I found his discussion on sexuality in the Bible compassionate yet holding true to what Christians have held for centuries.

The issues Longman covered are controversial. There has been much discussion and many books written about them. I found many of his ideas new and worthy of consideration. I must admit that I skimmed over some of his critiques of other authors, especially those unfamiliar to me.

Longman has included discussion questions on the topics so this book could be used in a group setting.

Tremper Longman III (PhD, Yale) is Distinguished Scholar and Professor Emeritus of Biblical Studies at Westmont College in Santa Barbara, California where he was the Robert H. Gundry Professor of Biblical Studies for nineteen years before his retirement. Before Westmont, he taught at Westminster Theological Seminary in Philadelphia for eighteen years. He has authored or coauthored more than thirty books.

I received a complimentary egalley of this book from the publisher. My comments are an independent and honest review.
Posted by Joan Nienhuis at 7:51 AM