The Moroccan Girl by Charles Cummings 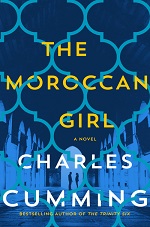 This novel is one of those complex ones of international espionage. It is a bit ironic as a writer of spy novels is asked to do some spy work. For author Kit, reality rubs shoulders with his own fiction.

The plot involved Russians, UK protesters, MI6 operatives and even a fellow from the CIA. Kit misjudges many of them as most are not who they claim to be. I found keeping the characters straight as to who was on which side was very difficult. Because there is so much character deception, the character development is minimal.

The novel contains some action with assassinations, kidnapping, secret meetings, fast getaways, etc. It is a long novel, however, and there were many slow parts to it. Cummings has included much from the current political situation in the world and that was interesting. People who like methodical spy novels may like this one. Readers who like the action and suspense amplified, as I do, may find this one a bit tedious, as I did.

I received a complimentary egalley of this book from the publisher. My comments are an independent and honest review.
Posted by Joan Nienhuis at 1:50 PM