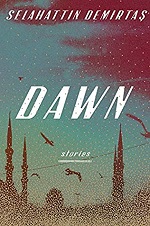 These are short stories about everyday people, Demirtas writes. But these are stories about people in situations far from those in a country such as the U.S. In one story, a young woman is raped. She returns home but then finds that she is to be killed by her brothers and father. It is about the honor of the family. In another story a woman on her way to work smells tear gas. A demonstration must be nearby. She's hit on the head by something. Collapsed and bleeding, she is taken to jail with protesters. Even though innocent, she is in jail for months, waiting.

Some of the stories are intensely touching. Some of the stories I did not understand, even though they were haunting. What I did gather from reading the stories included glimpses of living in a world with which I am totally unfamiliar. A world where there is another bombing, 68 people dead that day. The drive to continue living under such circumstances is amazing.

When asked why he had chosen Seher (Dawn) as the name for the main character in the title story of the book, Demirtas said dawn represented hope, dealing the first blow to the darkness when darkness thinks it has won. (166)

This is a good book for readers who would like a glimpse into another world.

Selahattin Demirtas (b. 1973) is a Zaza-Kurdish politician and former coleader of the Peoples' Democratic Party in Turkey. He passionately believes in the democratic future of Turkey. He has been imprisoned since November, 2016. He ran for president in 2014 and again in 2018, conducting his campaign from his prison cell. He is still being held in a maximum-security prison in Edirne. Dawn is his first work of fiction. Photo (c) Peoples' Democratic Party HDP

I received a complimentary egalley of this book from the publisher. My comments are an independent and honest review.
Posted by Joan Nienhuis at 8:17 AM