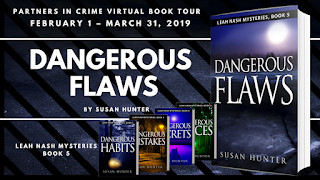 True crime writer Leah Nash is stunned when police investigating the murder of a beautiful young college professor focus on her ex-husband Nick. Leah has no illusions about her ex, but despite his flaws, she just can’t see him as a killer. Reluctantly, she agrees to help Nick’s attorney prove that he isn’t.

But Nick’s lies make it hard to find the truth, and when a damning piece of evidence surfaces, Leah plunges into doubt. Is she defending an innocent man or helping a murderer escape? She pushes on to find out, uncovering hidden motives and getting hit by twists she never saw coming. Leah’s own flaws impede her search for the truth. When she finds it, will it be too late to prevent a devastating confrontation.


I think I've read all of the Leah Nash mysteries and they just keep getting better. Nash is my kind of protagonist. She is quick to be irritating people with her intense investigation into a murder. She's pushy when she knows people are lying. She's relentless when she thinks she's on the right trail. While she ultimately solves the mystery, she takes a few wrong paths to get there.


The plot for this mystery was a bit complex. There were plenty of red herrings that kept me wondering who the murderer was. I like that I was made aware of clues right along with Nash. It made me feel like I was there with her her, trying to identify the culprit.

I like that Hunter gave me a good mix of character development and plot movement. I feel like I am really getting to know Nash and her passion. I like the relationship issues Hunter included in this novel. Family loyalties and protection were explored through the actions of several characters.

I recommend this novel to readers who like a well designed mystery with well crafted characters. Much of the plot in this novel hangs on Hunter's previous book in the Nash series. While this book could be read on its own, readers would enjoy it more if the previous one in the series had been read first.

Visit these other great hosts on this tour for more great reviews, interviews, guest posts, and giveaways!
Click here to view the Dangerous Flaws by Susan Hunter Participants.

I received a complimentary egalley of this book through Partners in Crime Virtual Book Tours. My comments are an independent and honest review.
Posted by Joan Nienhuis at 6:13 AM

I need to read this series. It sounds so good.

Thanks for hosting the latest book in the Leah Nash series, Dangerous Flaws, on your site. And of course, thank you for the review. I truly appreciate it!

Dangerous Flaws by Susan Hunter is my favorite in the series so far because of the complex and surprising plot twists and intriguing tensions between characters. Initially the murder suspects seem limited, but as the tale progresses, multiple possibilities arise. The reader begins to share Leah's unrelenting curiosity in a search for the truth. In fact, more than one mystery is solved as a new facet of one "minor'character emerges. I am looking forward to Leah Nash's next adventure.