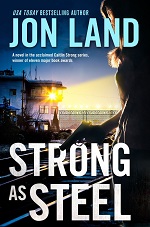 1994: Texas Ranger Jim Strong investigates a mass murder on a dusty freight train linked to a mysterious, missing cargo for which no record exists.

The Present: His daughter, fifth generation Texas Ranger Caitlin Strong, finds herself on the trail of that same cargo when skeletal remains are found near an excavation site in the Texas desert. She’s also dealing with the aftermath of a massacre that claimed the lives of all the workers at a private intelligence company on her watch.

These two cases are connected by a long buried secret, one that men have killed and died to protect. Caitlin and her outlaw lover Cort Wesley Masters must prove themselves to be as strong as steel to overcome a bloody tide that has been rising for centuries.

Caitlin Strong is a Texas Ranger like no other. She is one tough woman and that comes across loudly in this novel. The story contains tons of suspense and an increasing body count. Caitlin is brought into a case that soon shows signs of relating to a case her father, also a Texas Ranger, had worked on when Caitlin was just a toddler. The story from decades ago is revealed little by little as Caitlin pursues the current mystery. The technique works rather well as the stories parallel each other. Some characters are involved in both cases and grudgingly reveal information to Caitlin.

The plot is complex, involving many locations and several different time periods. That means the beginning of the novel may be a bit confusing. Stories are given that don't seem to be related until later in the novel. But it does come together and make for a good narrative in the end.

Land's writing style is unique with clipped dialogue and frequent sarcasm. That gives a sense of the intensity of the work of the Rangers and the relationships between them. This is a good novel for readers who like a strong female heroine and who don't mind some of the bad guys actually being good guys (or just the opposite). There is even an aspect of an ancient mystery thrown in, with religious belief hanging in the balance. While this is a novel in an ongoing series, there is enough backstory woven in to make it read well on its own.

CHAPTER 1
Dallas, Texas
“You want to tell me what I’m doing here again?” Caitlin Strong said to Captain Bub McNelly of the Texas Criminal Investigations Division.
McNelly, who favored string ties and shiny cowboy boots, turned to the quartet of figures in equally shiny windbreakers milling behind him in the makeshift staging area, who looked more like businessmen. Caitlin had heard he was a descendant of the famed Texas Ranger captain Leander McNeely, a man who’d once told the whole of the U.S. government to go to hell, but wasn’t too keen on the freedom with which Rangers still operated today.
“Special Response Teams hang their hat on being multi-jurisdictional,” McNelly told her. “Consider yourself the representative Ranger.”
“Since when does an SRT look more comfortable holding briefcases than firearms?”
“I need to tell you that computers are the real weapons these days?” McNelly asked her. “And those boys accompanying us are forensic experts who know how to fire back.”
“Just two guns, yours and mine, backing them up,” Caitlin noted.
“I don’t need a computer to do the math, Ranger,” McNelly said, while the four techs wearing windbreakers hovered behind them in front of the elevator. “You and I serve the warrant on the geek squad upstairs and let the experts do their thing with brains instead of bullets. How hard can it be?”
They were about to serve a search warrant on an information technology firm on the 42nd floor of the Chase Tower, the city’s tallest building. Caitlin had served plenty of more “traditional” search warrants in her time on the likes of biker gangs, drug dealers, and various other suspects. The kind of service that found her backed up by guns and plenty of them, instead of briefcases and backpacks.
A chime sounded ahead of the elevator door sliding open.
“In my experience,” Caitlin said, stepping in first to position herself so the door didn’t close again before the SRT computer forensics techs were inside, “it pays to have brains and bullets.”
McNelly smiled thinly. “That’s why you’re here, Ranger. You were specifically requested for the job.”
“By who?”
“I don’t know. Orders came from the top down.
The cab began its ascent. If this were a Ranger operation, as opposed to CID, Caitlin would have insisted on securing the space in question prior to bringing up the civilians. Because that was clearly what these personnel in ill-fitting windbreakers pulled from a rack were. Civilians.
“Get your warrant ready, Captain,” she told McNelly, as the cab whisked past the floors between “L” and “42.”
He flapped the tri-folded document I the air between them. “Got it right here.”
“What’s CTP stand for again?” Caitlin asked, referring to the acronym of the company on which they were about to serve the warrant.
“Communications Technology Providers. I thought I told you that.”
“Maybe you did, but you never told me what the company did to get on the Criminal Investigation Division’s radar. I’m guessing that’s because somebody ordered you to take me along for the ride. All well and good in this political world we live in, until something goes bad.”
McNelly flashed Caitlin a smirk, as a chime sounded to indicate the elevator had reached its desired floor. “I can tell you this much, Ranger. The suspects we’re after here don’t know a gun from their own assholes. Worst thing they can do is infect us with a computer virus.”
He led the way through the open cab door, without waiting for Caitlin to respond. She exited next, followed in a tight bunch by those four computer techs in their windbreakers which made it look like they’d stuck their arms through Hefty bags.
The doors along the hall were uniformly glass, sleek and modern, some frosted. According to the building layout Caitlin had studied, Communications Technology Providers occupied a pair of adjoining office suites adding up to nearly five thousand square feet in total. One was a corner office, meaning at least a portion of those suites would enjoy wraparound windows and plenty of natural light.
Caitlin had just reflexively shoved her jacket back behind the holster housing her SIG Sauer P-226 nine-millimeter pistol, when the glass double-door entrance to Communications Technology Providers ruptured behind a fusillade of gunfire.
***
Excerpt from Strong As Steel by Jon Land. Copyright © 2019 by Jon Land. Reproduced with permission from Jon Land. All rights reserved.

Jon Land is the award-winning, USA Today bestselling author of 50 books, including ten titles in the critically acclaimed Texas Ranger Caitlin Strong series, the last of which, STRONG TO THE BONE, won both the 2017 American Book Fest and 2018 International Book Award for Best Mystery. The next title in the series, STRONG AS STEEL, will be published in April. MANUSCRIPT FOR marked his second effort writing as Jessica Fletcher for the MURDER, SHE WROTE series, and he has also teamed with Heather Graham for a new sci-fi series starting with THE RISING. He is a 1979 graduate of Brown University, lives in Providence, Rhode Island.

Click here to view the Strong As Steel by Jon Land Participants.

I agree that this book was full of suspense and so much more!!!! I loved it!

Deliciously sweet ! Did you consider a marketing plan for the book ? To gather initial reviews, try honestbookreview dot com