Caught Up In It by David Burnsworth Blog Tour and Giveaway

Caught Up In It 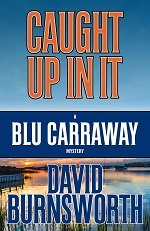 The award-winning diva, C, has got a big problem: someone wants her dead. A team of mercenaries attempts to gun her down in Kuala Lumpur. Lucky for her, Lowcountry Private Investigator, Blu Carraway, is already on the job there for a different client. Double-lucky for C, they make their move when she's chit-chatting with him in a bar. Unlucky for the mercenaries, four of them end up dead.The hunt is on now for the mega-pop star. Where does she go to hide out? The sleepy islands around Charleston, South Carolina -- Blu's backyard. He's already proven himself once, so C hires the Blu Carraway Investigation Agency to protect her for real. The job takes Blu halfway around the world and several cities in between. The search for the truth reveals what could drive a person to want someone else dead. And Blu Carraway ends up right in the way.


I like these Carraway novels even though I don't like the part of society they feature. Blu plunges into the world of thugs and mobsters and the body count is high. I like the Low Country setting even though I'd never want to meet the seedy people Blu consults for information.

I like the good balance of character development and action in this novel. And action there is! Blu and his cohorts always seem to get into situations where lots of people end up dead. At least they are mostly bad guys.

This is a good novel for readers who would like getting into the life of a tough Low Country Private Investigator who does not shy away from gun fights. You'll read about high power deals some feel are worth killing for. You'll come across supposed friends who don't hesitate to betray Blu for money. And you'll experience the mosquito laden atmosphere of the South Carolina coast islands.

David Burnsworth became fascinated with the Deep South at a young age. After a degree in Mechanical Engineering from the University of Tennessee and fifteen years in the corporate world, he made the decision to write a novel. He is the author of both the Brack Pelton and the Blu Carraway Mystery Series. Having lived in Charleston on Sullivan's Island for five years, the setting was a foregone conclusion. He and his wife call South Carolina home.

Visit these other great hosts on this tour for more great reviews, interviews, guest posts, and giveaways!
Click here to view the Caught Up In It by David Burnsworth Participants.

I agree. There is plenty of action in these books. Now I am waiting patiently waiting for the next book!