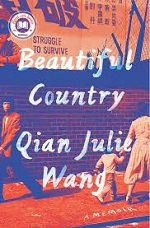 Wang has crafted an engaging memoir of living as an undocumented child in New York City. Her father had traveled to America first with his wife and child arriving later on a visitor visa. They never left and lived in fear of deportation. It was heartbreaking to read of the manual sweatshop labor her mother had to do after having been a published professor in China. Qian started school without speaking English and suffered childhood forms of discrimination. Life was hard for this family.

This is a well written memoir highlighting the experiences of those coming to America for a better life. Qian's father, while a child, had seen tragedy at the hands of Communists. America was to be a land of opportunity yet their being undocumented limited their options for employment. Qian's experiences are heartbreaking.

Her story pretty much ends at sixth grade. I would have liked to know more about how she came to go through the long process of citizenship. While her memoir gives us a good feeling of the experience of being undocumented, it failed to help explain how she made her way to success in the legal world. Perhaps a sequel is needed.

Qian Julie Wang was born in Shijiazhuang, China. At age 7, she moved to Brooklyn, New York, with her parents. For the next five years, the three lives in the shadows of undocumented life in New York City. She is a graduate of Swarthmore College and Yale Law School. She is now managing partner of Gottlieb & Wang, LLP, a firm dedicated to advocating for education and civil rights. Her writing has appeared in major publications and she regularly speaks on issues such as immigration, education, discrimination, and economic disparity. She and her husband live in Brooklyn. You can find out more at https://www.qianjuliewang.com/. Photo © Ryan Muir

Posted by Joan Nienhuis at 4:52 PM