Written in Ink by Sara Davison Blog Tour and Giveaway 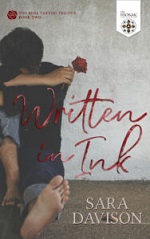 Everything he has built his life and future on has been torn away.

Cash McCall has loved Dr. Renee Dawson for half his life. Although they’ve talked about a future together, she has never believed it was the right time for them to get engaged. Now she has ended their relationship, and he has no idea why.

Everything Renee worked so hard for is in jeopardy. One agonizing decision has changed everything, and she has been forced to shatter the heart of the man she loves. And her own.

The extremist militant group The Arm is on a mission. Its leader doesn’t care how many innocent lives are lost in the pursuit of the group’s end goal, and Renee has seen something she was not supposed to see.

If Cash can’t get to her in time, Renee could end up in the crosshairs of the terrorists, and he may lose her—and any chance at the life he’d always envisioned—forever.

This novel has a strong message about abortion. Davison has done a good job of creating an interesting and very readable story around the whole issue of premarital sex and abortion. The characters are realistic and well drawn. There is some suspense near the end as well. Several issues are explored in the novel, including family relationships, forgiveness and committed love. There is a very clear presentation of the gospel.

The point of view changes as the narrative follows three people. We get insights into the lives and thoughts of Cash, father of the unborn child, and Renee, the pregnant medical student finishing her training. A couple since high school, they are not Christians and developed an intimate relationship. We are also introduced to Jude, brother to Cash and a dedicated Christian. His story was apparently developed in a previous novel. The final major character is Beau. We see from his story what can happen with dedication to a cause when it becomes militant and misguided. The changing point of view technique is not a favorite of mine as I feel it breaks up the flow of the novel.

This is a good novel on the controversial topics of abortion and protesting them. Good discussion questions are included. Readers should know there are a couple of places where you might get a little queasy.

Sara Davison is the author of three romantic suspense series—The Seven Trilogy, The Night Guardians, and The Rose Tattoo Trilogy, as well as the standalone, The Watcher. She has been a finalist for more than a dozen national writing awards, including Best New Canadian Christian author, a Carol, two Selahs, a Holt Medallion, and three Daphne du Maurier Awards for Excellence in Mystery/Suspense. She is a Word and Cascade Award winner. She currently resides in Ontario, Canada with her husband Michael and their three children. The words on the mug she uses every morning pretty much sum up her life—I just want to sleep, drink coffee, and make stuff up. Get to know Sara better at www.saradavison.org and @sarajdavison.

The Rose Tattoo Trilogy is set in one of my favourite small towns in Canada—Elora, Ontario. It was such a joy to develop the setting in this series, describing the quaint shops and the natural beauty of the gorge, places I have wandered through countless times. In the first two books of the series—Lost Down Deep and Written in Ink—the real-life fifty-nine stone steps built into the hillside and leading down to the river that runs through the gorge plays a big part in the story, as reflected in this excerpt:

The fifty-nine stone steps set into the side of the hill felt like twice that many as Cash descended slowly into the ravine.

The Elora Gorge was a natural wonder, with a steep rock face flanking both sides of a narrow river. The beauty of it was lost on him, though, and had been for five years, since the night his sister Tessa had traipsed down these stairs and onto the ice. Ice that had shattered beneath her feet, allowing the frigid river to steal her from them forever. Simply being here now drove daggers as sharp as those shards of ice into his chest. How did Jude deal with it when he’d been the one who had lingered at the top of the steps, too tired after a long day to go after her in the cold and dark, until he’d heard the ice crack and his sister scream?

By then it had been too late.

Below is a photo of the actual steps down to the river. I have been up and down those steps many times, and while they aren’t that easy to traverse (especially the going up part!) the effort is well worth it when you reach the bottom and find yourself surrounded by beauty, as Cash does here. 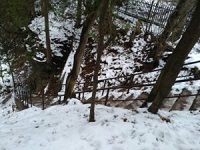 A cool spring breeze brushed across his cheeks. High up in one of the trees, roots clinging, against all odds, to fissures halfway up the rock across the water from him, an owl hooted, the sound drifting across the ravine. Moonlight glinted off the water, sending sparks of light skittering across the surface. Cash scanned the gorge. As far as he could see in either direction, the beauty of the night, of this place, filled his senses.

Something flowed through him like the water passing between the rocky banks. Cash withdrew one hand from his pocket and held it to his chest. What was that? He struggled to put a name to it. Peace, maybe?

Personally, the Elora Gorge has always been a place of peace for me, as it is for Cash in Written in Ink. Do you have a place you go when you need to get away from the chaos of life and experience peace?

For Him and My Family, October 27

Because I said so -- and other adventures in Parenting, October 31

The Meanderings of a Bookworm, November 3 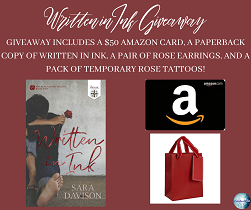 To celebrate her tour, Sara is giving away the grand prize package of a $50 Amazon card, a paperback copy of Written in Ink, a pair of rose earrings, and a pack of temporary rose tattoos!!

I received a complimentary digital copy of this book through Celebrate Lit. My comments are an independent and honest review. The rest of the copy of this past was provided by Celebrate Lit.
(My star ratings: 5-I love it, 4-I like it, 3-It's OK, 2-I don't like it, 1-I hate it.)
Posted by Joan Nienhuis at 5:45 AM

This seems like a book that people will either want to read or cant read. Thanks for sharing!

Congrats on your recent release, Sara, Written in Ink sounds like a thrilling read! Thanks for sharing it with me! Thanks Avid Reader for sharing your great review! Have a great weekend!

Thank you for sharing your review of this book, it sounds like an excellent red

I enjoyed the excerpt!