Murder at the Picture Show by Miranda Atchley 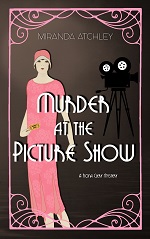 On an autumn evening in New York City, amateur sleuth Fiona Clery and her partner Max Gillespie attend the picture house for the premiere of a silent film shot in their city. The night is filled with excitement and glamour . . . until the star of the film, Sylvie Boscombe, is murdered. Unable to sit back with a killer on the loose, Fiona pursues the case, leading her across the city, from opulent neighborhoods, to film sets, to the underground speakeasies Sylvia frequented. When a man she believes to be innocent is arrested for the murder, Fiona's search becomes all the more urgent. Can she solve the case before it's too late?

Meanwhile, Max gets a shocking surprise about his past that could offer answers to questions he has long held. And Fiona makes a discovery regarding her missing sister that could blow the case wide open.

Buy your copy of Murder at the Picture Show.

You can read my review of the first book in this series, Deadly Pearls.

I liked this historical mystery. While it is the second in a series, it read well on its own. Fiona is a good amateur sleuth helped by her dear friend and maybe potential beau, Max. This novel has both a murder to be solved and character changes in Fiona and Max. The murder investigation is a rather subtle aspect of the plot as we read more about the main characters and the relationships with their respective family members.

Atchley has done a good job at firmly placing the characters in New York in the 1920s. Interesting aspects of the novel include the making and premiering of silent films and the city in the throes of prohibition. There were some rough people in the city at the time and Fiona and Max get caught in some suspenseful trouble at the end.

I like Atchley's writing style. The novel flows well. And the best part, it looks like there will be some more sleuthing for Fiona in the future. I'll be watching for the next book featuring her.

Miranda Atchley is a history enthusiast and complete bookworm whose passion for books and times gone by have compelled her to write several novels, one of which was a finalist for an indie writing award. When not writing at her home in Arkansas's Ouachita Mountains, she loves getting lost in a good book, spending time with her spoiled Chihuahua, watching period dramas, and learning about her favorite period of time, the 1920s. Visit her blog at http://mirandaatchley.blogspot.com/.

Posted by Joan Nienhuis at 5:02 AM