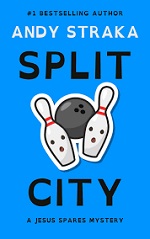 When murder sees double there is more than meets the eye.

Murder sees double in the Catskills when former pro bowler Billy Gills finds himself summoned to the Partridgeberry County morgue to identify the body of his identical twin brother Bo. Billy is the proprietor of Split City Lanes, a classic hometown bowling alley, located in the charming/y rundown, lakeside town of Twin Strikes. Partridgeberry and Twin Strikes are peopled by a hearty band of upstaters and oddball characters – an unlikely setting for a murder. But Bo is the founder of TreadBo, a successful specialty bowling shoe manufacture; he is famous for his quirky sense of fashion, fitness fanaticism, and unusual hobbies, which may have gotten him into trouble. Not to mention, Billy has some demons of his own to slay. Fortunately, Split City Lanes is also home to “Jesus Spares”, a church service, bowling, and social gathering where almost anything can happen. Billy may need every ounce of faith he has to discover the truth about himself and his eccentric twin brother.

From beginning to end, surprises and unusual characters abound in this amateur sleuth mystery, the first in a new series.

This is the first book I've read by Straka and I liked it. The narrative is written clearly and the plot is easy to follow. The mystery is interesting but almost takes a back seat to character relationships. Billy and Bo, while identical twins, previous bowling stars, and partners in a bowling alley, are not as close as brothers might be. While Billy is convinced of Bo's character, Bo does have a number of secrets he's kept from Billy and that makes for some tension as Billy acts as an amateur sleuth to uncover the murderer.

The murder plot revolves around bowling, particularly Bo's business of manufacturing shoes. There is more than one villain in the plot which complicates matters a bit. Their actions are ultimately woven together at the end yet I am not so sure all of the strands are neatly tied off. I wish there had been a bit more about bowling, such as a few insightful techniques. I do like to learn something about a topic when I read a novel. Having a bunny in the ball return was pretty good though.

This is an entertaining novel for readers who enjoy a small town mystery with some odd characters and tense relationships. I liked Billy's tenacious attitude toward the investigation and will be looking for more novels featuring him.

Andy Straka is an award winning mystery author. His books include the Shamus Award-winning Frank Pavlicek series, techno and suspense thrillers. He is also a past finalist for the Agatha Award and the Anthony Award. He is a former college basketball player and licensed falconer. He is a graduate of Williams College and holds an MFA from Lindenwood University. A three time judge for the Edgar Allen Poe Award, he is co-founder of the popular Crime Wave program at the annual Virginia Festival of the Book.