Wonders of the Galaxy Blog Tour 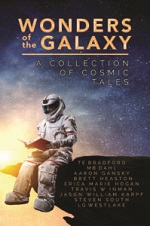 Book:  Wonders of the Galaxy

A series of space tales based on parables from the Holy Bible.

These are entertaining short science fiction stories based on parables in the Bible. I am glad the parable was identified before each short story because I am not sure I would have been able to identify some of them. A few of the authors seemed to take a general principle from the parable and weave a story around it. One of the short stories is said to be based on Matt. 18:12-14, the story of the shepherd seeking out the once lost sheep. The story, however, is about a sheep, so to speak, who goes to great length to find the shepherd.

My favorite story was perhaps because it so clearly represented the parable. A fellow in his space ship taking his family goods to another planet's market is set upon by pirates. His ship damaged and himself near death, he watches as two ships of his own people pass him by. And then an enemy ship stops and comes alongside and, well, you know the rest of the story. It is a great representation of the parable set in a future time of space travel.

As with any collection of short stories by a number of authors, the quality of writing and writing style varies. It is an interesting collection of stories and does make one think about how the parables could be retold in another setting.

Jason William Karpf is a multitalented actor, musician, professor, and Jeopardy champion whose writing runs the gamut from true crime to speculative fiction.

Aaron Gansky is an award-winning novelist and Dungeons and Dragons whiz who lives for his children, coaching football, and watch Marvel movies.

Erica Marie Hogan’s books range from long ago historical dramas to frozen fantasies on faraway planets. Regardless of where the story originates, it comes from the heart—because Erica believes genres are transcendent.

Brett Heaston is the creator of the Message to Kings podcast and the author of The Resilience Awakening. He lives in the Pacific Northwest, a history nerd, and an adventure junkie.

Steve South is a traveler, a karaoke singer, and a profound believer in the power for stories to move people; his first novel, The Queen of Steel and Fire, won the 2019 Minnesota Author Project Award for YA fiction.

L.G. Westlake lives in the “Land of Enchantment,” but also lives a dream life in far-flung galaxies where she regularly charts the unknown; her previous novels have included award-winning fantasies and thrillers.

M B Dahl is a wife, mother, and award-winning author of dystopian adventures. She loves dressing up like a warrior and fighting dragons, imaginary or real.

T.E. Bradford is an international bestselling author, a Selah award finalist, and a self-proclaimed geek who believes her writing is “a little piece of magic” given to her by God.

Travis W. Inman has been a cowboy, a missionary, a soldier, and more in his multi-storied career, and his stories reflect his diverse background. In his spare time, he searches for hidden treasure, both financial and culinary.

More from the Editor

WHY A CHRISTIAN SPACE OPERA?

“What do you like to read,” I asked my seventeen-year-old grandson.

When he said he likes Space Opera, I had to admit I was lost. I love Science Fiction but didn’t know Space Opera was different. After ordering him a book, I started doing some research. Phrases like, “wildly popular” spoke to me.

Christians use a variety of fiction genres to reach their audiences. I wondered if we were losing younger readers because we are not being relevant to what interests them. Could this genre be presented in a way to encourage young readers to see new truths in the Bible?

Space Opera is a subgenre of science fiction and usually emphasizes space warfare, melodramatic space adventures, or chivalric romance. These themes, while occurring in outer space, will feature such elements as faster-than-light travel, futuristic weapons, and sophisticated technology.

Not surprising this genre is popular with kids today whose lives evolve around the latest technological advancement.

The name is a takeoff from “soap opera” because of its melodramatic presentation. Space operas emerged in the 1930s and continue to be produced in literature, film, comics, television, and video games.

As I pondered these concepts, an idea developed to present a Space Opera anthology, aimed at high school level, to use the parables as inspiration behind the stories. When I presented the idea to my publisher, I received an enthusiastic nod of approval. And the rest is history.

We are confident young people will enjoy these highly imaginative stories penned by some of Elk Lake’s best authors. Each story contains a synopsis of the related parable and how the parable is used in the telling of the story. Additionally, each story has an engaging graphic to whet the imagination.

To our knowledge, this is new for Christian publishing. We look forward to our readers’ comments and to Wonders of the Galaxy II in 2022.

Cats in the Cradle Blog, October 20

For Him and My Family, October 24

Because I said so -- and other adventures in Parenting, October 28

The Meanderings of a Bookworm, October 31

I received a complimentary digital copy of this collection through Celebrate Lit. My comments are an independent and honest review. The rest of the copy of this post was provided by Celebrate Lit.
(My star ratings: 5-I love it, 4-I like it, 3-It's OK, 2-I don't like it, 1-I hate it.)
Posted by Joan Nienhuis at 5:52 AM