Labyrinth of Lies by Irene Hannon 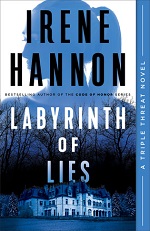 Danger awaits on a covert mission where few are who they seem to be.

When the daughter of a high-profile businessman disappears from an exclusive girls' boarding school, police detective Cate Reilly is tapped for an undercover assignment. It doesn't take her long to realize that beneath its veneer of polish and wealth, Ivy Hill Academy harbors dark – and deadly – secrets. But the biggest shock of all? The only man she ever loved in also working at the school.

Zeke Sloan has never forgotten Cate, but now isn't the best time for their paths to cross again. When their two seemingly disparate agendas begin to intertwine – and startling connections emerge among the players – the danger escalates significantly.

But who is the mastermind behind the elaborate ruse? And how far will they go to protect their house of cards?

You can read my review of the first in the series, Point of Danger.

This is the second in a series featuring three sisters but read very well on its own. It is a novel for readers who like more about characters and their thoughts than they do suspenseful actions. This is a romantic suspense with the emphasis on the romance. I found it interesting that the characters in this novel, Cate and Zeke, seemed to think it was more important to restore affections than concentrate on the investigative task before them. I prefer police and federal agents keeping their emotions in check until the case is finished.

Hannon's writing style includes lots of character ruminating in the midst of work. Characters think about what they might do and why, many times, and then think about it all again after the fact. Cate and Zeke have a history of hurt so there is much they need to work through to renew romance. But work on it they do.

There is a mystery involved and there is a good dose of suspense near the end. Those seem to take a back seat, however, to a potential romance. I like to learn something about a topic or issue when I read fiction but I did not find anything of that nature in this novel. This is definitely a romantic suspense for readers who like the romance more than the suspense.

Irene Hannon is the bestselling and award-winning author of more than sixty contemporary romance and romantic suspense novels. In addition to her many other honors, she is a three-time winner of the prestigious RITA Award from Romance Writers of America. She is also a member of RWA's elite Hall of Fame and has received a Career Achievement Award from RT Book Reviews for her entire body of work. You can find out more at www.irenehannon.com. Photo © DeWeesePhotography.com.

Posted by Joan Nienhuis at 1:15 PM