Where the Light Fell by Philip Yancey 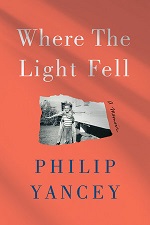 This memoir is, I think, a cathartic exercise for Yancey. It often seems to be a healing experience to recount the toxic events from youth and that is what Yancey does. He takes us up to the last of his elementary school years in the first half of the book. His father died of polio when Yancey was still a toddler so he was raised by a single mom. His memories include having pets, going to the dentist, sticking a raisin up his nose, sibling rivalry, antics during long sermons at a fundamental church, skipping a grade in elementary school, the Cold War, changing schools, southern stories, racist relatives, odd cousins, his mother unraveling, Bible camps and more.

Yancey then writes about high school, his fascination with science, breaking his bones repeatedly, self awareness and personality, attending a Bible college, having his first authentic spiritual experience, his older bother's spiritual crisis and later mental breakdown and drug habit, and graduate school and entering a career in writing.

Yancey does share a few thoughts on his life near the end of the book. He writes about suffering and grace. But the thrust of the book is Yancey's history alone. He writes in the Author's Note, “Looking back, I wanted to understand myself, as well as the environment that helped form me.” (4430/4463) He did so, he says, the only way he knows how, by writing.

I am not sure of the benefit of this book to the readers. It is a good example of how one one man made it through toxic experiences with a mature faith while his brother did not. What is missing, however, is how Yancey did make it through to being the Christian he is today. Perhaps he has shared that in other books he has written but he does not do so here. So, if you want to read an engaging account of Yancey's experiences, this is your book. If you want insights into surviving similar toxic experiences, you will have to look elsewhere.

Philip Yancey has authored more than two dozen books. His books have been given thirteen Gold Medallion Book Awards from Christian publishers and booksellers. He has more than seventeen million books in print and has been published in over fifty languages. He worked as a journalist in Chicago for some twenty years, editing the youth magazine Campus Life while writing for a variety of other publication. He and his wife moved to Colorado in 1992 where they live now.

Posted by Joan Nienhuis at 3:40 PM