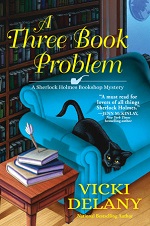 This is the seventh novel in a series and the first I've read. I thought it read well on its own. Gemma, manager of the Sherlock Holmes Bookshop and Emporium, and Jayne, owner of Mrs. Hudson's Tea Room, are chosen as caterers of weekend Sherlockian get together. Ryan, local police detective and Gemma's romantic partner, is roped into assisting in the kitchen.

The host of the weekend, David Masterson, is a wealthy man and a prominent Sherlock fan and authority. It becomes evident that the people he has invited to the weekend at the Suffolk Gardens House don't like him and some know nothing about Sherlock. When a murder occurs in Gemma's presence, she is on the case, often to the dismay of detective Ryan.

I liked this cozy mystery. I thought the characters were done well although I did have trouble liking Gemma. I liked learning from the people who knew much about Doyle and were really into the Sherlock works. It was interesting that they were knowledgeable of the movies produced and actors involved, debating who was best. The pace of the book is not fast as much of the narrative centered on relationships rather than investigative technique. The murderer reveal came almost by accident although there were many clues to the identity. While Gemma claimed deductive reasoning in the end, she didn't share it with readers until after the reveal.

I do wish more had been said somewhere about the title of the book and the play on the three pipe problem, an allusion to the length of time it would take Sherlock to figure out a complex mystery.

Vicki Delany is one of Canada's most prolific cozy mystery writers. She writes under her own name and her pen name, Eva Gates, for a total of more than forty novels. She is a past president of the Crime Writers of Canada and co-founder and organizer of the Women Killing It Crime Writing Festival. You can find out more at http://vickidelany.com/. Photo by Iden Ford Photography.

Posted by Joan Nienhuis at 2:13 PM