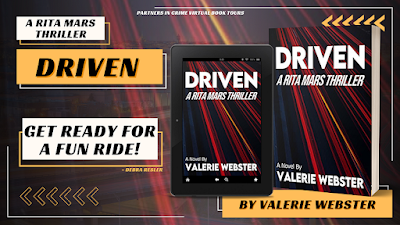 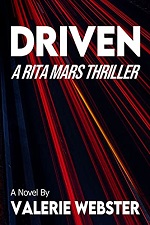 Ex-investigative journalist, Rita Mars loses an old friend to what looks like suicide. She’s convinced he was murdered to cover unethical maneuvers and save reputations in the abyss that is Congress. Back stabbings inside the beltway sometimes extend beyond metaphorical. She’s going to butt heads with the local good ole boy authorities and navigate the deliberately stoked smoke screens of the duly elected, but she is never going to give up.

The heroine in this novel, Rita, was a surprise for me as she is gay. Thoughts about her past relationship and a potential one were prominent. I felt too much text was given to the romantic tension. I don't think I have seen such an emphasis placed on the romantic tension when the heroine is a heterosexual. I felt the two cases Rita works on are really enough to carry the plot through so that only a hint of the romantic aspect would have been required.

Rita was a hard character for me to like. She irritates people, is forceful and often rude. I trust future novels featuring her will see her character level out a bit and become more confident in her abilities. Rita has some quirky friends, such as her trans secretary. The characters were well developed though I did think the trans character was a bit overdone.

I like the two thriller plot lines. I like the political aspect with underhanded financial activities being investigated. I like the suspenseful end although we were set up for it. I think this debut effort shows Webster has great potential as a thriller author.

“Rita Mars, this is a voice from your past.”

“Who the hell is this?” Rita demanded.

It was eleven o’clock, and the dreary end of a long day. A miserable October rain tapped on the office windows. Through the water slashed glass, Baltimore’s Mitchell Court House next door was a smear of grey and black.

“I first met you devouring Hershey bars in the newsroom at midnight.” The man was gleeful.

“That narrows it down.”

Great clue. Hell, she’d been a reporter for seventeen years before she started the agency. Rita cradled her chin. The police department snitch who gave up the narcs ripping off drug dealers? The accountant with the guilty conscience who squealed on the HUD housing contracts?

“We were a pair and then again we were not.”

“I was the snow king and you were the fire breather.”

Rita started to hang up, but there was something eerily familiar about that line.

“You never know when you’ve had your last chance,” the man said.

“Bobby Ellis.” Instinctively, Rita touched the worn chrome Zippo in her pocket that bore those very words. Chills ran along her arms and the hair bristled at her neck.

“God, I’m so glad to hear from you. Where are you? When can I see you?

“The Overlook Inn in Harper’s Ferry. Breakfast at ten. I’ll have a lot to tell you. A story for above the fold.”

Rita scribbled his instructions on a blank notepad. “Tell me now.” Above the fold on a newspaper’s front page was reserved for big time news.

Rita thought he was hanging up.

Rita Mars sang along with the Shirelles. She glanced at the Jeep’s speedometer and then at the rearview mirror to check for approaching troopers.

The West Virginia countryside blazed with yellow and scarlet. Sunlight sprinkled the rock-strewn pastures with brilliance and made the car’s white hood shimmer like a snowfield. Even the black and white Holsteins seemed brighter than usual as they ripped up the last shreds of yellowed pasture grass.

Though it was late October, Rita had the top down on the Jeep. It was good to ride on this open road alone with the sun and wind. She couldn’t really be forty-five this year. She ran thirty miles a week and could still get into jeans the size she’d worn in college. Rita peered over the top of her Raybans and took another look in the mirror. Ok, so her dark hair was shot through with silver.

She smiled. It made her look more interesting. After all, how many older women had she fallen madly in love with in her younger years?

Rita flipped the radio off and concentrated on her meeting with Bobby Ellis. She hadn’t seen him in forever. Yes, she had thought he might be dead. A superior journalist, he’d thrown it all away with a coke habit that he paid for with a career and a marriage. No one had seen or heard of him now for more than two years.

After he disappeared, a malaise had set. Rita abandoned investigative reporting and spend her time working on a detective’s license. She was going to right wrongs instead of writing about wrongs as she described her abrupt life change.

She sighed. She wanted to return to the happier thoughts that had so recently danced in her head.

A red truck with a rainbow sticker on the front bumper appeared the in oncoming lane. Rita’s smile came back and she waved as they raced each other.

She returned to her former mood of excited anticipation. She was seeing Bobby again.

They had been reporters together on the Washington Star. More like brother and sister than co-workers, they had fought over editorial recognition, wept on each other’s shoulders, and held each other’s hand during their respective long, dark nights of the soul.

Rita tried sweet talk at first when his habit began to devour him. Then she got tough. They fought bitterly. In the end, he surrendered everything to the white powder.

She’d been as angry with herself as with him. She couldn’t make him stop. Like a flashback, the feelings were the same when she thought about her childhood. She hadn’t been able to stop the runaway train her father rode either. Alcohol carried him far and fast. In the end, he stuck his police revolver into his mouth and killed his pain.

Bad memories again. Rita shook her head and switched the radio back on.

“There she was, just a walkin’ down the street . . . “ Rita sang along at the top of her lungs and pushed the accelerator just a little farther with her docksider.

Five miles and three oldies but goodies later, she slowed as the road narrowed to the twisting mountainside lanes that led to Harper’s Ferry. Down the sheer embankment on the passenger’s side, she could see canoes below on this rocky segment of the Potomac. She took a deep breath. The cobwebs of leftover memory cleared. It was a gorgeous day. At the top of a steep winding hill, Rita spied the flagpole that stood in the center of the Overlook Inn’s circular drive. Old Glory ruffled its red stripes in a soft October breeze that seemed more spring than autumn.

The parking areas along the drive were jammed with American made pickups and SUVs. Lots of military bumper stickers and window decals. Families just out of church hopped out of cars and headed for the Inn’s dining room and Sunday brunch buffet.

As she reached the crest, she had to slam on the brakes. The drive was blocked by two Harper’s Ferry sheriffs’ cars, a West Virginia trooper vehicle—blue gumball lights twirling—an ambulance from nearby Ransom, a fire truck and a dented beige Crown Vic with county plates.

Guests and townies milled around the west annex. A tall, grim-faced sheriff’s deputy held them at bay.

“What the heck is this?” Rita jumped out of the Jeep.

Inside, the interior of the Overlook lobby was cool and dark. The desk clerk was a woman with long red nails and a plunging neckline to her sundress. Her blue eye shadow made her look like an alien. Oblivious to Rita, she leaned across the far end of the registration counter to stare out the front door toward the commotion outside. Rita pulled off her Raybans.

“Man killed hisself.” The woman continued to lean and stare over the counter.

The taste of metal rose in Rita’s throat. “Killed himself?”

“Room 107. Maid found him.” The clerk’s sense of duty returned and she walked toward the center of the counter where Rita stood. “Can I help you with something?”

Rita felt icy from the inside out. She dug her hand into her pocket to touch that Zippo talisman she always carried.

“I came here to meet someone.” The words jumbled in her mouth.

“Name?” The clerk absently flipped the registration book behind the counter.

The clerk looked up then and said once more. “Name?”

The two women stared at one another.

Valerie Webster spent a career developing law enforcement applications for surveillance, security and forensics. She has also been a triathlete and a crime reporter. She honed her writing skills through "Sisters in Crime" and "Mystery Writers of America's" mentoring program. In DRIVEN: A RITA MARS THRILLER, she weaves professional experiences into a high tension plot that sweeps the reader into the action from Page 1 to the breath-taking conclusion.

Visit these other great hosts on this tour for more great reviews!

Thanks for the review! Sounds like some interesting characters!

Thank you for a thorough review and for constructive feedback!