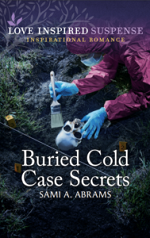 Could be the key to solving a murder…

Searching for her best friend’s remains could help forensic anthropologist Melanie Hutton regain her memories of when they were both kidnapped—unless the killer gets to Melanie first. For her safety, Melanie must rely on Detective Jason Cooper, who still blames her for his sister’s death. Can Jason set the past aside to solve the cold-case murder…and shield Melanie from the same fate?

This romantic suspense got off to a bit of a rough start for me with references to a previous kidnapping and death of a friend. I thought I had missed a previous novel but I think it was just backstory not related clearly. While Melanie has returned to find the body of her murdered friend, there are other bodies for her to work on as the county forensic anthropologist and coroner.

There are some interesting issues in this novel, such as the reason one chooses a profession. Both Melanie and Jason chose their careers because of the past kidnapping and murder. Another issue deals with parents. Melanie's parents did not want their reputation sullied by talk of a daughter having been kidnapped. They wanted her to stay quiet and that proved to be quite a toll on her well being.

There were plenty of suspects although I was pretty sure of the villain early on, thanks to many clues. The romance was done well with lots of obstacles to overcome. Potential readers should know there is violence described. Though not graphic it may be hard for some to read about. All in all a good romantic suspense with a definite Christian influence.

Two-time Genesis winner Sami A. Abrams and her husband live in Northern California, but she’ll always be a Kansas girl at heart. She enjoys visiting her two grown children and spoiling their sweet fur babies. Most evenings, if Sami’s not watching sports, you’ll find her engrossed in a romantic suspense novel. She thinks a crime plus a little romance is the recipe for a great story.

What writer doesn’t grow up reading every chance they get? That would be me.

Until my thirties, I hated to read. Then someone told me about Terri Blackstock, and I decided to give her books a try. I was hooked. I guess there’s something to finding the right genre. Romantic Suspense is it for me. Of course, that makes sense. I love CSI, NCIS, and Criminal Minds. Over the years, I have expanded my taste, but there’s just something about suspense that keeps me coming back.

A little over five years ago, I decided to start checking off some of the items on my bucket list. I learned how to rock climb and got my scuba certification, among other things. When I got to the item, writing a novel, I sat down and pounded it out. Check the box; I was done. Wrong. God had other plans and placed some amazing people in my life.

One of those plans was attending MurderCon, a conference for writers where they learn from experts about, you guessed it…murder. Actually, it’s about police procedures, crime scene analysis…the list goes on and on. One of the workshops I attended was with a forensic anthropologist, and the idea for Melanie Hutton and Buried Cold Case Secrets was born.

I loved writing Melanie’s story. She’s a fighter and refuses to let anything stand in her way, including the man, Jason Cooper, who blames her for her best friend’s death. Jason holds on to the past and his hatred toward Melanie, but he soon learns that if he puts aside his assumptions and listens, he’ll discover the truth about the day his sister died. Letting go of his anger and blame is tough for Jason, but when he does, he finds the life he’s always wanted.

I hope you enjoy reading Melanie and Jason’s story as much as I did writing it.

I’d love to hear from you. Please visit my website at samiaabrams.com and sign up for my newsletter.

Labor Not in Vain, January 11

For Him and My Family, January 12

For the Love of Literature, January 12

Lights in a Dark World, January 13

Because I said so -- and other adventures in Parenting, January 16

Through the Fire Blogs, January 17

A Good Book and Cup of Tea, January 21

Posted by Joan Nienhuis at 5:51 AM

Thanks for the good review, I'm looking forward to reading this book.

This sounds like a fantastic book, thank you for letting us know.