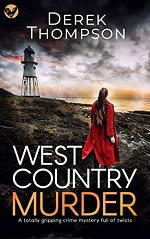 This is a British police procedure mystery with a different kind of hero. Wild is a police officer with a past and an attitude. This is the first novel I have read in this series by Thompson so I missed Wild's tainted activities in the first novel. But the past comes back to bite him and he is frequently trying to keep people from using his past misdeeds against him. The other aspect of his unusual character is that he is so determined to get what he wants he frequently steps over the line of what is appropriate for law enforcement. I was amazed at how he managed to get out of trouble with his superiors.

There is quite a bit of colloquial language in this novel American readers may not know. When a youth was said to be in borstal, I had no idea, as was the case with schtum. There is also police slang, such as misper.

I did enjoy the mystery. I felt transported into Wild's world of getting along with other officers, investigating a murder and running down the villain. He is not a squeaky clean policeman but he managed to get the task done.

Derek Thompson grew up in London and started writing fiction in his teens. He writes freelance and his short fiction has appeared in both British and American anthologies. He has also written comedy material for live performance and radio. He has written several thrillers.

Posted by Joan Nienhuis at 7:00 PM