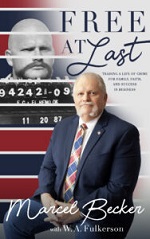 Abused and isolated, Marcel Becker ended up on his own at the age of 15, and his descent into the cycle of addiction, crime, and incarceration followed the typical pattern. He became, in his own words, a “prolific offender” – an outlaw biker, a criminal mastermind, and the sole target of a multi-agency federal task force. When Marcel received custody of his children, however, he knew he had to make a change or the consequences would fall on them. Breaking out of his old life was full of struggle, uncertainty, and setbacks, but it proves that anyone who is willing can find true freedom and escape the dark cloud of the ex-con.

A United States Congressman once called Marcel’s life a story “of redemption and triumph,” and so it is.

Becker says he spent a good part of his life not considering religion. His life was evidence of that. He writes of his experiences with crime and prison and how he managed to turn his life around. His encounter with God came after that. The obnoxious Christians he had encountered had turned him off to Christianity. It wasn't until he got to know a reasonable and faithful Christian that he realized his need for salvation and was mentored to faith.

Becker is open about his life, including his frustrations with church. This book is a good wake up call for church leaders. It will help them see how the church appears to someone totally outside of the church culture. It will also demonstrate the devastation that results from a pastor's unfaithful actions.

It is a good book for young people to read. It certainly points out the painful result of choosing a life of crime. It will not cement the idea of turning to God to get straightened out as Becker got his life turned around before becoming a Christian. And, as is often the case with autobiographies of this nature, well over three fourths of the book describes Becker's life before salvation.

Marcel Becker is a businessman, a designated community leader, and a motivational speaker. Once a five-time offender, Marcel turned his life around over twenty years ago, and since then has served on innumerable boards, political campaigns, and civil causes, finding great success in all of his endeavors. He is currently the Vice President of Propulsion Controls Engineering, a Job Force Motivational Speaker, has received several certificates of congressional recognition, has had two resolutions introduced in the California Legislature honoring his service to the community, and received a “Hero” award from California State Senator Joel Anderson for his efforts with the Second Chance Program.

Marcel shares stories of his life before and after taking the high road to success in order to encourage others to be the best they can be. He lives in San Diego, California.

If Marcel Becker sat down next to you in a coffee shop today, you would assume him to be a respectable, mild-mannered business man, and you would be right. What you would not think is, “I bet that guy has done time – and a LOT of it.”

And yet, he has. Marcel Becker was one of the most notorious criminals to come up from his neighborhood of Oceanside, CA during the eighties and nineties, when his activities landed him behind bars on federal charges five times. His activities also earned him a lot of scars, plenty of fear and admiration among the criminal class, and admission into one of the most dangerous biker gangs in the country. He’s done eighteen months of solitary confinement in a single stretch, been labeled a flight risk and an extremely dangerous martial arts expert, and the government tried to use his rival gang to illegally execute him. His nickname on the streets and throughout police precincts and prisons?

Flash. Because if you mess with him, he’ll knock you out immediately.

When Marcel talks about his past (and shows the newspaper articles to prove it), the experience is quite a rollercoaster ride.

To make a long and fascinating story short, at the height of his life of crime, Marcel became responsible for his two children, and he had to make a change fast. He started at the bottom as a grunt laborer on the docks, and eventually he rose through the ranks to become a majority owner of a ship repair company and a serial entrepreneur. Today, he is a titan of industry, a civil servant, a friend to mayors and senators, and a living testimony that anyone can turn their life around.

When I’ve expressed regret for a boneheaded decision I’ve made and some wasted time, Marcel reminds me that he spent his youth in and out of prison. If he focused on how terrible his mistakes were, he would never have done anything else. The message is, ‘If I can get past my mistakes, so can you. Move forward, hombre.’  I could give example after example like this – knowing Marcel is a real blessing, and he offers more than just interesting stories. He offers hope and encouragement, a reminder of God’s grace and the masterful plan of redemption awaiting us all if we will only turn to it.

You wouldn’t think that this man sitting next to you at a coffee shop was once tormented by an abusive upbringing, a brilliant master of crime, and public enemy number one.

But that’s sort of the point, isn’t it?

For Him and My Family, February 6

Because I said so -- and other adventures in Parenting, February 10

Spoken from the Heart, February 14

Marcel, Free At Last sounds like a very interesting memoir and I like the cover! Good luck with your book and the tour and thanks for sharing it with me! Thanks Avid Reader for sharing your review! Have a fantastic day!

I really appreciated what he said about the church, too, especially that he came back to the church even though it was flawed.

Thank you for sharing! This looks interesting!

An inspiring synopsis, this sounds like a deeply personal and excellent read. Thank you for sharing your review and the author's bio and book details