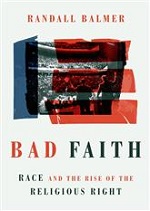 Balmer is bold in his conclusions. “Sadly, the Religious Right was never about the advancement of biblical values.” (78) It was not the Supreme Court's decision on abortion in 1973 that set the Religious Right into motion. He notes prominent Christian leaders did not oppose the decision. Even James Dobson, later a vocal opponent of abortion, said at the time it was plausible for an evangelical to hold a fetus was not a full human being. (36)

That does not mean all evangelicals are racist, he notes. (79) The Religious Right has done such a good job of obfuscating the origins of their political activism, most Christians are unaware of them. “The beauty of the abortion myth,” Balmer writes, “is that it conceals an uglier truth.” (80)

I read this book as part of my ongoing quest to understand the current state of evangelical Christianity in America. I found it to be a very insightful book, helping me understand why some Christians seem to be defending racist attitudes and defending individuals in the political arena that evidence the opposite of biblical values.

I recommend this insightful book.

Randall Balmer (PhD, Princeton University) graduated from Trinity College and Trinity Evangelical Divinity School. He was a professor of American religious history at Columbia University for twenty-seven years before moving to Dartmouth College in 2012, where he is the John Phillips Professor in Religion. He is the author of more than a dozen books. He was ordained an Episcopal priest in 2006. He and his wife live in Vermont and New Mexico.

Posted by Joan Nienhuis at 8:28 AM