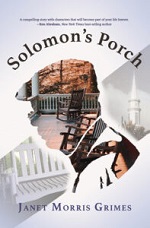 Solomon is running out of it.

A broken and forgotten man fighting the demons of dementia, he longs for the past when both he and his beloved military town of Ginger Ridge once thrived.

When his stooped body collides with the hardened realities of the present, Solomon lies in a coma as an unidentifiable victim of a hit-and-run accident in a faraway city.

With nothing to keep him going but flashbacks of relationships from his past, Solomon has no idea what a difference he will make on the future …

It has been a while since I have read a novel this touching. Part of it had to do with the plot structure. Grimes did well in revealing the right information at the right time. And as for the resolutions to the two major issues, I like how Grimes inserted a welcome twist just when I thought all was lost.

Part of the novel's impact had to do with the character construction. Solomon is the kind of man every young person would like to have as a close neighbor. As the novel progresses, we find out just how important Solomon's life has been. And Harper is such a compassionate person. We find out why she is so helpful as her story is revealed. I did find Raphael a hard man to like through much of the novel, having such anger issues. I appreciate how more of the positive side of his inner character was eventually revealed and I did like him better at the end.

This novel explores how our benevolent actions have an influence far beyond our expected reach. It's a feel good story. It reminds us there are wonderful people having powerful impacts on lives every day. It is also an encouraging story, reminding us we can be one of those people too.

Janet may not have realized she was a writer at the time, but her earliest childhood memories were spent creating fairy-tale stories of the father she never knew. That desire to connect with the mysterious man in a treasured photograph gave her a deep love for the endless possibilities of a healing and everlasting story.

A wife of one, mother of three, and Tootsie to four, she currently writes from her quiet two-acre corner near Louisville, Kentucky. She’s spent the last few years preparing to introduce her novels and children’s stories to the world.

The same is true for my main character, Solomon Thomas. He comes from such a place of deep tragedy. Once he lost everything, he had nothing left to offer but himself. So he did.

There are many themes running throughout this story. A lost sense of home. Running out of time. Redemption and second chances. But more than this, connection and community. Sometimes, we are so trapped by our own brokenness, we don’t know how to let others in. But what if we did?

Solomon learned to do just that. Show up for people, and let them into his world as well. And over time, it was enough to breathe new life into his beloved town of Ginger Ridge.

What happens next? Solomon deserves a sequel, so I’ll be working on that very soon.

For Him and My Family, February 16

Because I said so -- and other adventures in Parenting, February 20

Posted by Joan Nienhuis at 5:24 AM

Thank you for sharing your wonderful review of this book, it sounds like an excellent read

Thanks for this fantastic review! I’m thrilled that you loved it as much as I do.

Congratulations on your recent release of Solomon's Porch, Janet, your book sounds like a thrilling mystery to be enjoyed! Good luck with your book and the tour! Thanks for sharing it with me! Thanks, Avid Reader, for sharing your review! Have a fantastic day!

Thank you for the review. Sounds good.

Looks like an encouraging book.
Thanks for the contest.

This sounds like a book that I am going to enjoy.

The book sounds so good! Thank you for sharing your review

Thank you for your comments. I’d love to answer any questions you may have about Solomon’s Porch.

Make sure to enter the contest for a chance to win a paperback copy and a $50 Amazon gift card!

My niece could use this book. Thanks.

This sounds interesting! The title made me think it was a Biblical fiction story, though.

Hi Everyone! Just wanted to stop in to announce Solomon is holding a one-week Kindle sale for $.99!