Silencing the Siren by by Denise L Barela Blog Tour 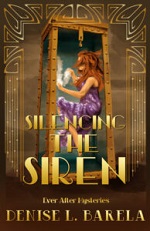 Andrew Grayson thought he had everything… until he met her.

The indulged son of wealthy parents, Andrew has always gotten whatever he wanted almost before he knew he wanted it—clothes, gadgets… even a car! What more could a young man desire?

Of course, her beauty attracts him. How could it not? Add to that a kind heart, and Andrew can’t help but fall for her.

Annabel’s connection with the freakshow repels his parents and their society friends. They want him to sever all ties with her and his new friends. Oh, and marry the “right” girl with the “right connections.” But he won’t do it. He’ll defy them and marry his little mermaid.

When Annabel turns up missing, declared dead, things don’t add up, Andrew begins asking some difficult questions, the most important being, “What happened to the little mermaid of the Coney Island freak show?”

Find out in this next book in the Ever After Mysteries, combining beloved fairy tales and mysteries. Silencing the Siren offers a retelling of “The Little Mermaid” that will keep you gripped to the edge of your seat as you watch the story unfold.

I liked this story. It is a heartwarming romance. I would have liked a more definite setting, however. I was never sure of Andrew's age, for example. He was old enough to drive a car but acted much younger. I felt he was rather immature for being of marriageable age. And I was not clear on the year this story took place. A couple of paragraphs could have anchored the story in a chronological setting a little more firmly.

As with many of the novels in this series, freedom is taken when representing the original fairy tale. In the original tale, mermaids cease to exist at death while humans have eternal souls. Hans Christian Andersen's mermaid sought an eternal soul. In this novel, Annabel has experiences similar to that in the tale, such as an operation on her legs, but Annabel is already a human and what she seeks a life more like other humans. While there is a Christian emphasis in this novel, seeking an eternal soul would have been an added spiritual dimension in the novel.

The novel really paints a clear picture of wealthy and high society parents caring more for their image than they do for the happiness of their son. It also shows how people with disabilities and even those with different ethnic backgrounds were treated by wealthy people at the time.

This is a fun novel and good debut effort. It is a nice romance with a little mystery thrown in. Barela's writing style is entertaining and I'll be looking for more from her.

Denise Barela’s passion for fiction, her faith, and general creativity define her life. In all things, she strives to glorify God, though especially in and through her writing. She has spent the past six years working for a publicity company and five years working as the head editor for a publishing company. With an MFA in Creative Writing and a Professional Writing certificate, Denise enjoys using her education and work experiences to help authors achieve their own writing dreams. When she’s not working away at her desk, you might find her reading a good book or following Alice down the rabbit hole…

I’m so excited to share Silencing the Siren with you! This book was so much fun to write and research. I learned so many fun facts about old cars, old New York, and even doorbells!

Yes, you read that correctly. Doorbells.

These noisy items were such a novelty in the 1920s that they were often given as Christmas gifts!

I wanted both Andrew and Annabel to represent that feeling we have all experienced at least once in our lives. That feeling of not belonging. It looks different for each person, but it’s a uniting feeling.

Annabel will never be accepted by those outside her family, but they more than make up for that. Andrew is popular and well-off in society, but as he comes to know the Lord, he starts to feel that rift with his superficial friends and family. It’s with other believers, Annabel’s family, that he finds that deep relationship he desires. They are more than willing to provide.

I hope you enjoy reading Silencing the Siren as much as I enjoyed writing it!

For Him and My Family, February 12

For the Love of Literature, February 14

Through the Fire blogs, February 20

Posted by Joan Nienhuis at 5:32 AM

Thank you for sharing your wonderful review of this story, I enjoyed reading the synopsis and am looking forward to reading the book

This sounds really good, thanks for sharing