If the Tomb is Empty by Joby Martin with Charles Martin 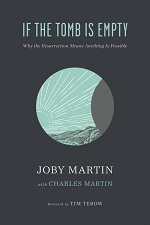 Martin reminds us that the apostle Paul said he wanted to know Christ and the power of his resurrection. (Philippians 3:10) If Christ has not been raised, then our Christian faith means nothing. The resurrection matters. But what does that empty tomb really mean for us? Martin says it changes everything.

To help us understand the importance of the resurrection, Martin looks at the mountains in Scripture where God manifested Himself. He says we cannot rightly and fully know Jesus unless we rightly and fully know the Old Testament so begins with mountains experiences there. We read of Abraham and his experience on Mt. Moriah. Next is Moses on Mt. Sinai and the ten commandments. Then there is Elijah on Mt. Carmel. Moving into the New Testament, we read of Jesus and the Mt. of the Beatitudes, then the Mount of Temptation, Mount of Transfiguration, and Mount Calvary.

Martin has included some good teaching, such as exploring our looking to stuff to satisfy us and thinking God is like a buffet where we can take what we want and leave what we don't like. A teaching I was particularly interested in dealt with receiving a new heart at salvation but still having the same mind, therefore needing renewing. I was disappointed that Christ's resurrection and the power associated with it was not brought in to the teaching on this important topic.

There is quite a bit of retelling of the biblical stories, something that would appeal more to new Christians rather than seasoned Christians who know the stories well. Martin's humor would also appeal more to younger readers.

Martin's ultimate encouraging word is found after the transfiguration. If we put our itty-bitty faith in “the infinitely powerful resurrected Jesus,” that will be more powerful than putting our trust in anything in this world. (loc 2858/3523) There is much good teaching in this book. I wish more of it had centered on knowing the power of Christ's resurrection and how it changes everything.

Joby Martin is the founder and lead pastor of The Church of Eleven22 in Jacksonville, Florida, a movement for all people to discover and deepen a relationship with Jesus Christ. In 2012, Joby and a team of leaders launched The Church of Eleven22 which has grown to multiple locations. The church serves nearly 15,000 people weekly and several more thousand through the live services at Eleven22 Online.  A retail, thrift ministry has been developed with two locations and Eleven22 has entered the Florida prison system with the Word of God. Joby is also a national speaker who has been invited to speak at Acts 29 conferences, multiple youth camps including FCA and YM360, as well as at Expo East and West, Sticky Team East and West, NINES and Velocity. He is also an active member of the Acts 29 church planting network and has preached internationally including Scotland, Africa, Jamaica, Brazil and Israel.

Charles Martin is a is a New York Times bestselling author of 15 novels, including his most recent, The Letter Keeper. He has also recently authored two nonfiction works, What If It’s True? And They Turned the World Upside Down. His work has been translated into 30+ languages.

Posted by Joan Nienhuis at 6:17 AM