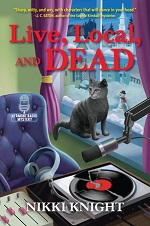 This is a really different cozy mystery. In fact, I'm not sure I'd identify it as a mystery at all. We do have a murdered fellow shortly after the beginning but then the novel turns to Jaye's relationships and profession. A single mom, she is not adverse to a male sleepover when her daughter is staying the weekend with her dad, Jaye's ex.

Jaye bought a small town radio station. There is quite a bit of text dedicated to Jaye discontinuing a conservative talk show and the animosity she receives because of it. Granted, the setting is Vermont so one would expect a more liberal audience for the station. There did seem to be more political statements and opinions than one would expect to find in a novel in this genre.

Probably what I missed the most was an amateur sleuth. While Jaye is a strong woman, especially when defending her radio station, she does nothing to solve the murder except make a suggestion to the local chief of police. She does figure out another murder attempt but because of her daughter and not because she is investigating.

There are some interesting issues explored in the plot, such as community support and radio personalities that claim the right to say anything, true or not, because it's a show, not a truthful news broadcast. There is information about Jewish religious practices, how a radio station operates, and a good dose of Vermont culture.

I did enjoy the novel although it was not the typical cozy mystery I expected.