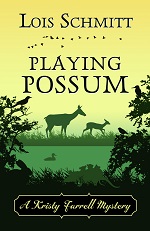 When animals mysteriously disappear from the Pendwell Wildlife Refuge, former English teacher turned magazine reporter Kristy Farrell is on the case. Days later, the body of the refuge’s director is found in a grassy clearing.

Kristy, assisted by her veterinarian daughter, investigates and discovers strong motives among the suspects, including greed, infidelity, betrayal, and blackmail.

As Kristy delves further, she finds herself up against the powerful Pendwell family, especially matriarch Victoria Buckley Pendwell, chair of the refuge board of trustees, and Victoria’s son, Austin Pendwell, who is slated to run for the state senate.

But ferreting out the murderer and finding the missing animals aren’t Kristy only challenges. While researching a story on puppy mills, she uncovers criminal activity that reaches far beyond the neighborhood pet store.

Meanwhile, strange things are happening back at the refuge, and soon a second murder occurs. Kristy is thwarted in her attempts to discover the murderer by her old nemesis, the blustery Detective Wolfe.

Kristy perseveres and as she unearths shady deals and dark secrets, Kristy slowly draws the killer out of the shadows.

"In her third book of the series, writer Lois Schmitt has crafted an intricately-plotted mystery full of twists and humor, with a cast of colorful characters, set in a wildlife refuge rehab center. Cozy fans, and especially followers of Schmitt's animal lovers' mysteries, will find great entertainment in Playing Possum."
-Phyllis Gobbell, award-winning author of the Jordan Mayfair Mysteries

I enjoyed this mystery. It is entertaining and informative. Schmitt's writing style is pleasant to read and the plot develops nicely. We are confronted with a number of suspects although I knew who I wanted the murderer to be early on. Kristy is a good amateur sleuth. As a reporter for an animal welfare magazine, she can investigate in some unusual places because of her magazine assignments. The narrative contained a good balance of Kristy's personal life and her investigative actions.

I always like to learn something when I read fiction and this novel is informative about animal rescue. It was hard to read about puppy mills and using animals to transport drugs but I appreciated the information. I also learned what to do if I find a wild animal that is injured. We also see a distinction in those who want to protect animals for political reasons and those who really have a heart for them

This is a good mystery for animal lovers, being both entertaining and informative.

This is the second book I have read in this series and you can read my review of Something Fishy here.

I waited until a man and a woman emerged from the county medical examiner’s van. I followed them into the wildlife preserve, maintaining a discreet distance while wondering what happened. Did a jogger succumb to a heart attack? Did a child fall into a pond and drown? I inhaled deeply, hoping to steady my nerves.

I passed the clearing on the right where the administration building was located. I continued trailing the two members of the medical examiner’s staff until another clearing came into view—this one bordered by yellow crime scene tape.

Not far from where I stood, spread out in full view was a female body with blood covering much of the head. The body was face down, but I recognized the small build, sandy colored hair, and jade green shirt.

I tasted bile. I wanted to scream, but I slapped my hand in front of my mouth.

After regaining my composure, I surveyed my surroundings. Three people wearing jackets emblazoned in the back with the words Crime Scene Investigator were near the front of the clearing. One was bent over the body and the other two appeared to be examining the nearby ground. When the medical examiner’s team approached, the investigator next to the body rose up and started talking. I couldn’t make it all out, but I did hear him say “Blow to the head.”

“Oh, no,” I mumbled when I spied two homicide detectives I knew.

Detective Adrian Fox, a thirty something African American, stood on the side of the clearing, near a small pond. He was talking to a woman who yesterday had been arguing with the preserve’s director.

The director had called this woman Elena, so I assumed this was Elena Salazar, the education coordinator. I couldn’t hear what she was saying to the detective, but she was gesturing wildly with her arms.

I sighed. Wolfe and I had a history. He was a bully who had gone to school with my younger brother Tim, constantly picking on him. Granted Tim was the classic nerd who might as well have worn the sign “Kick Me” on his back. I had recently solved two of Wolfe’s murder cases, which only irritated him more.

Wolfe spied me and headed in my direction, his face turning the color of a beet. His gray pants hung below his pot belly, his glacier blue eyes as cold as ever, and he wore the same annoying grin as when he was a kid that made me want to slap his face.

“What happened?” I asked.

“I’m here about a dead squirrel,” he said. “I’m a homicide detective. What do you think happened?”

He narrowed his eyes. “How do you know her?”

“I’m doing a story on the wildlife refuge and—”

“How come whenever you do a story people die?”

Not really a nice way to put it.

“Who found the body?” I asked.

“This is none of your business. This is a crime scene.” He pointed a fat finger at me. “You need to leave.”

“I’m behind the yellow tape,” I argued.

I didn’t think his face could get any redder, but it did. “Stay out of my way.” He spun around and stomped off toward the side where Detective Fox appeared to be jotting something in a notepad. Elena Salazar was no longer there. I had no idea where she went.

I had lots of questions, but I wasn’t getting answers from Wolfe. The crime scene investigators were packing up. Maybe I’d have better luck with them.

“When was she killed” I asked the one investigator, who looked young enough to appear on an acne remedy commercial.

“We need to wait for the autopsy.”

“Do you have an approximate time of death?”

“Sorry. We can’t talk to the public.”

I sighed. I’d have to get the answers somewhere else.

I wondered why the victim had been at the clearing. I glanced at the pond, guessing this was where the rehabilitated turtle would be released. Did she come here early to check things out before the release? But what would she be checking?

My thoughts were interrupted as the medical examiner’s team passed by me carrying a stretcher with the covered body. I figured I might learn something if I listened to their conversation. Eavesdropping was one of my talents.

I scratched my theory about arriving early to check on conditions for the turtle release when one of the attendants said, “I can’t imagine why anyone would be in these woods at midnight.”

A mystery fan since she read her first Nancy Drew, Lois Schmitt combined a love of mysteries with a love of animals in her series featuring animal magazine reporter Kristy Farrell. Lois is member of several wildlife conservation and humane organizations, as well as Mystery Writers of America. She received 2nd runner-up for the Killer Nashville Claymore award for her second book in the series entitled Something Fishy, She previously served as media spokesperson for a local consumer affairs agency and currently teaches at a community college. Lois lives in Massapequa, Long Island with her family, which includes a 120 pound Bernese Mountain dog. This dog bears a striking resemblance to Archie, a dog of many breeds featured in her Kristy Farrell Mystery Series.

I received a complimentary copy of this book through Partners in Crime Virtual Book Tours. My comments are an independent and honest review. The rest of the copy of this post was provided by Partners in Crime Virtual Book Tours.
(My star ratings: 5-I love it, 4-I like it, 3-It's OK, 2-I don't like it, 1-I hate it.)
Posted by Joan Nienhuis at 5:29 AM

Thanks for the great review! This one does look like a fun and interesting book. I also love learning something new from the books I read! :-)