The Inn on Hanging Hill by Christy Barritt Blog Tour 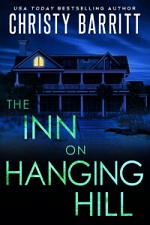 Book: The Inn on Hanging Hill

Each house has a history. Each person has a secret. Each turn of events leads to danger.

Lindsey Waters never wanted to return to the seaside inn where she grew up. Too many traumatic memories haunt the place, both from her childhood and from days gone by. But with guilt relentlessly chasing her after a tragic choice, she’s desperate for a fresh start.

Mysterious incidents begin plaguing the inn—dangerous incidents—that make it clear someone wants to scare Lindsey away. But why? Does it have anything to do with the two weeks missing from her memory when she was abducted at age twelve?

Childhood friend Benjamin Newsom seems like an answer to prayer when he shows up to work as a handyman. But something is different about him, something Lindsey can’t put her finger on. She’s certain Benjamin harbors secrets.

As peril continues to close in, Lindsey must decide if she wants to face her past or run. She doesn’t know whom she can trust, and whatever choices she makes will determine if she lives or if she becomes part of the inn’s tragic legacy.

I was pleasantly surprised by this romantic suspense. Barritt is a prolific author but I think this is the first novel I have read by her. I am putting her name on my list of authors to watch for on new releases.

The current events at the inn have roots in years past. All of the secrets come out in the end but that part of the plot is complex. I would have liked more of a build up in the plot so that when the end revelation did happen, I would have had more of the attitude that I should have known rather than wondering how I could have ever known. Also, some of the last actions of the villain seemed unrealistic with so many people to control.

Even though the plot development might not have been as tightly woven as I would have liked, I did like the character development in general. The potential romance was well done with suitable obstacles to overcome. The villain seemed a bit unrealistic but the others in the novel were crafted fine. I was happy enough with the novel that I will be reading some of the others she has written.

A USA Today and Publishers Weekly best-seller, Christy writes both mystery and romantic suspense novels that are clean with underlying messages of faith. Her books have sold more than three million copies, one has been made into a TV movie, and another is being developed for a TV series.

Christy’s books have won the Daphne du Maurier Award for Excellence in Suspense and Mystery, have been twice nominated for the Romantic Times Reviewers Choice Award, and have finaled for both a Carol Award and Foreword Magazine’s Book of the Year.

She’s married to her prince charming, a man who thinks she’s hilarious–but only when she’s not trying to be. Christy’s a self-proclaimed klutz, an avid music lover who’s known for spontaneously bursting into song, and a road trip aficionado.

Christy currently splits her time between the Virginia suburbs and Hatteras Island, North Carolina. She loves spending time with her husband, her two sons, and her four dogs.

I’ve always loved old houses—ones you can look at and see that they were once full of life and love. But, through the years something happened, and these places now stand in neglect. Based off that idea, I developed the Beach House Mystery Series. Each book is a standalone—the series is connected only by theme—and features a different beach house on a different beach.

The Inn on Hanging Hill was inspired by my time on Virginia’s Eastern Shore. The area was once thriving and one of the wealthiest in the country. But the railroad changed, and that left the area isolated and without enough work to support the population. It also left it with tons of history—and stories that go along with that history.

I hope you enjoy Lindsey’s story!

Spoken from the Heart, February 16

For Him and My Family, February 18

Because I said so -- and other adventures in Parenting, February 21

Posted by Joan Nienhuis at 5:34 AM

Thanks so much for the review! :-)

I like the cover and synopsis, this sounds like an excellent read. Thank you for sharing your wonderful review and the author's bio and book details

I liked your review, thanks so much for sharing!

Congratulation on your recent release of The Inn on Hanging Hill, Christy, which sounds like a thrilling romantic mystery for me to read and I love the cover! Good luck with your book and the tour! Thanks for sharing it with me! Thanks, Avid Reader, for sharing your review! Have a Happy Valentine's Day!

Great review!! She is an author I am wanting to read more of this year :)

This sounds like a great book. I love the cover.

Thank you for sharing! I'm adding to my list!