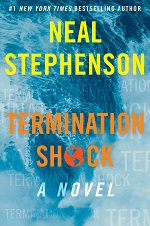 This novel deals with a number of issues and has just about every interesting feature, as well it should weighing in at over seven hundred pages. There is geoengineering by a private billionaire, operating his intricate plan to save the planet from climate change. There is deep fake media, ruining the reputation of the Queen of The Netherlands. There is brain enhancement when one fellow's brain is damaged during a border fight. There are people fighting with sticks over China border issues. There is travel over the world. There are futuristic weapons. There are drones and hydrogen fueled planes. There is an EMP attack.

No one would ever accuse Stephenson of lacking in description. He describes things to the extent I think around four hundred pages of this novel could have been eliminated and readers would not miss any of the essential nature of the plot. And the plethora of characters may boggle the mind. The Queen of The Netherlands has a part to play in the first part of the book but after her role at ruling changes, she hangs on even though she has no essential part in the plot. And T. R., the wealthy fellow with the idea and ability to save the world from climate disaster, acts and talks like a robot.

There are many issues covered in this novel. The primary one is geoengineering to avert climate disaster. But what if one person's answer turns out to be another person's disaster? What will nations do when an act is good for one nation but bad for another?

There is much to think about in this novel but it is not a page turner and took me weeks to read, and that while skipping over some of the lengthy descriptions and background material. For me, a great novel is giving the message in the fewest words possible. It is honing every event, dialogue and description so that the text yields the greatest impact possible. That is not a skill Stephenson has.

Neal Stephenson is the bestselling author of several novels. He lives in Seattle, Washington. You can find out more at https://nealstephenson.com/.  Photo: © Brady Hall