Forgive Us Our Trespasses by Tom Avitabile Blog Tour

Forgive Us Our Trespasses 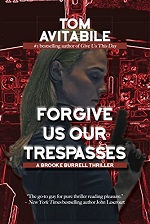 The bruise on the young goalie’s cheek got girls high school soccer coach Brooke Burrell’s attention. Brooke tries to keep her advantage as the most decorated woman agent ever in government service at bay while dealing with the suspected abusive father – although she’d love to punch his lights out. Her digging reveals the reason for his abusiveness and it connects to a massive international terrorist attack.

When the father is found dead, Brooke is accused of the murder. Suddenly, she is forced to defend herself in court, and in the court of public opinion – while trying to stop the insidious plot to kill hundreds of thousands of innocent people across the globe in one terrifying instant and bring the western world to its knees.

Filled with the nonstop thrills, all-too-real scenarios, and remarkable attention to detail that has made Tom Avitabile a consistent #1 bestseller, Forgive Us Our Trespasses is edge-of-your-seat storytelling of the first order.

This is the first novel I have read by Avitabile and I liked it. It has all the elements of an international thriller I like. The personal character interest was well developed alongside the increasing suspense. While this is not the first novel to feature Brooke Burrell as the heroine, I felt her character was developed well enough here that I liked her and her commitment to her past oaths to be loyal to the government. Her supporting characters were done well too. They are a quirky bunch with superior tech abilities. And tech abilities are needed to save the world from an attack that could kill hundreds of thousands. As to the plot development, it was done nicely, including an additional twist near the end, just when I though all the suspense was over.

This is a good novel for readers who like a plot offering an interesting group of people with a variety of skills racing the clock to outwit a powerful man who has also assembled a skillful set of people bent on causing great harm. I am not sure all of the technical actions and political movements are actually possible but Avitabile made it all work together for a good thriller. I have come to like Brooke and Mush and will be looking for the next in the series.

Brooke was escorted to the lobby of a government building where a tall man, wearing a sharp-cut suit and perfect tan, extended his hand as he introduced himself. “Mrs. Morton? Kyle Simms, head of 5-0.”
​
“Pleasure, Simms. Let’s get to it,” Brooke said as if she had been the one to call this meeting. It made him raise an eyebrow.

He extended his arm in the direction of the elevator. “Please.” The well-mannered Simms let her enter first. He pressed the button for the top floor. She noticed the manicured hand.Buffed, not polished. She detected the faint smell of cigars. Must have caught him coming back from a smoke break, she imagined.

“To the right,” he said as the elevator door opened. He pointed to the glass doors of a sunlit corner office. When they entered, he gestured to a small conference table opposite his very impressive desk. She noticed his “Love Me Wall.” It was de rigueur for military officers. His was filled with photos and newspaper headlines in wood frames. There was a plaque on the wall: Operation Desert Storm. A framed picture showed a platoon of Rangers. From across the room, she couldn’t make out which one of the younger men was Simms. A Ranger beret with a silver bar pinned to it was resting on the credenza. It told Brooke he had been a first lieutenant. Brooke took a seat.

“Coffee?” Simms said. Brooke considered it, then her overactive bladder of late. “No thanks. Is Jenny Kupalli alright?”

“Thank God. I was so worried when she didn’t show for the game this morning.”

“Mrs. Morton, you are here as a courtesy. I have an inkling of your former service to our country. So I wanted to give you every chance to tell me your side of the story.”
​
“Courtesy? You send a unit, a cage unit? To my school! You could have just called me. I would have driven right over.”

“I’m sorry, you know how this goes. I ask them to drive you over as a courtesy, and somehow they assign an RMP, not a detective’s car. Sorry. Wasn’t intentional.” Brooke wasn’t buying it. She had used this technique to soften persons of interest the
same way by putting a little police procedural fear into them before their conversation. “Are you considering me as a suspect?"
​
“Again, right now you are a POI. Nothing more.”

“Let me ask you, are you recording, transcribing or in any way preserving our conversation today, Saturday at 2:03 p.m. at 5-0 headquarters?” Simms smiled. If they were, and they weren’t, she just made the whole practice inadmissible in court. “No. Kyle Simms, Deputy Director of Law Enforcement, HPD state police department,” he said, clarifying his rank just to match her pseudo-official disclaimer.

His official response told Brooke that she didn’t need a lawyer. Over the next ten minutes she read him in on her total encounter with Mr. Kupalli and her suspicions about Jenny’s abuse.

He listened intently, scratching notes. When she paused, he waited. But she was not falling for the “fill-the-silence” ploy. So, he sat back, looked at her for a few seconds. She just looked back. It was a standoff.

He broke the stalemate. “And you had never met him before?”

“I don’t believe he ever came to a game. Seems like the kind of guy who wouldn’t cheer on an equipment manager.”

Brooke sighed. Simms was going to go strictly by the book. “Yes. Glock 26.”

“Do you know where it is now?”

“In the fingerprint safe by my bed.”

“Would you be willing to voluntarily surrender the weapon for ballistic elimination?”

“For my protection, and yours, you’ll need a warrant, hopefully limited in scope, Deputy Director. As I’m sure you’re aware, my husband is a high-ranking naval officer. Poking around our home might violate his Fourth Amendment rights and no less than three national security protocols.”

Brooke shot him a look. Her defenses reared up. “Wasn’t this all off record?”

“True, but this is more personal than professional.”

“That’s what I’m asking you. Did you shoot this model citizen?”

That was an odd question to ask off the record, Brooke thought. “Nope. In fact, just the opposite. I had hoped that I put the fear of God into him. I believed he’d have second thoughts about smacking around his daughter now that he knew I had eyes on him. But a Skel like him, he must’ve pissed in someone’s Cheerios somewhere along the way, and that’s what probably contributed to him achieving room temperature last night.”

Tom Avitabile is a writer, director, and producer with numerous film and television credits, a professional musician, and an amateur woodworker. He has an extensive background in engineering and computers, including work on projects for the House Committee on Science and Technology. His novel The Devil's Quota became a Barnes and Noble #1 bestseller, as did The Eighth Day, the first installment of his Bill Hiccock “thrillogy” that includes the novels The Hammer of God and The God Particle, and the first Brooke Burrell novel, Give Us This Day.

Visit these other great hosts on this tour for more great reviews!
Click here to view Forgive Us Our Trespasses by Tom Avitabile Tour Hosts

Posted by Joan Nienhuis at 5:24 AM

Thanks for your great review! I will be starting this one today! I am really looking forward to it. It sounds like a great book.