Treasure Atop the Mountain by Tonya A Matthews Blog Tour 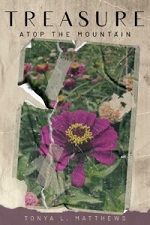 Book: Treasure Atop the Mountain

Broken by the unfathomable. Frightened of the future. And unaware of God’s hand at work. Gracie grew up working in her grandfather’s ice cream shop in the small Kentucky town of Ridgewood. Ridgewood is a quiet town known for little but a 20-year-old rumor that treasures are hidden somewhere in its hills. But when misfortune strikes, Gracie is faced with challenges no 11-year-old should have to bear. She has to learn to continue to live now that nearly everything about her life has changed. The losses are so devastating that still years later she fights the nightmares. Yet folks in the town in their own unique way watch out for their little girl as she matures into a young woman. This is a story about Gracie Howard and how she finally found healing in a message that her grandfather shared with her as a little girl and from a town with hidden treasure.

This is a different kind of Christian romance, set in 1960s rural Kentucky. The representation of the dialect was really strong for this PNW native and life long resident. I wish there had been an initial integration of a description of the location and year. It took me a while to understand where and when the novel was taking place.

I liked Gracie as a character. She seemed to be making great progress in accepting her life with her disability. I appreciate how her back story, how she lost a hand, was woven into the narrative. I did have difficulty liking Kage. He'd had a rough childhood and did not seem to be rising above it. I really did not like how he wanted Gracie to conform to his idea of the future.

There are several issues explored in this novel. One is rising above obstacles in life. Another concerns receiving help from others. There is also the concept of what it really means to be family, especially for Kage.

The setting and style of dialect and character interaction were not what I generally feel comfortable with in my usual reading. I do appreciate the broad theme of romance overcoming differences and am interested in how the story of this rural Kentucky community continues.

Tonya grew up on a family farm in Riverside, Kentucky. Her father recognized early on that hoeing tobacco and running hogs weren’t in her skill set. He opted to send her to college. Graduating from Western Kentucky University with honors, Tonya went on to support the business community for two decades as an executive for the Bowling Green Area Chamber of Commerce where she served a primary role in the organization’s multiple national honors.

Tonya has found writing to be a healthy escape and effective therapy in tough seasons throughout her life. Tonya began writing Treasure atop the Mountain 15 years ago when she and her husband were trying to start their family and encountered multiple disappointments. Ultimately, they signed up to be foster parents and adopted.

Tonya’s been married to Todd Matthews for 25 years. They have two grown daughters. In August 2019, she published Treasure atop the Mountain—a fiction novel based on real-life emotions that can be related to by many. Tonya’s second novel in the TREASURE series, Roxie Applesauce, released in August 2021. She’s currently writing the series’ third book, Get Will. Additionally, in 2022, she will debut the first two books in her children’s book series.

HOW THE BOOK CAME ABOUT

Treasure atop the Mountain provided for me a glimpse of hope that I needed at the time I wrote it. In the book, Gracie experiences misfortune no young girl should have to bear. Yet, in the end, she witnesses all the broken pieces come together and is overwhelmed by God’s hand in it.

When Todd and I got married in 1996, we didn’t try starting our family right away, and when we decided that we were ready, it didn’t come easy. We struggled for several years through disappointment after disappointment. I’d get home from work at the end of a long day and lean against the kitchen door facing, drop to the floor and breathe for what felt like the first time. I was hurting and doing my best to hide it.

My sister and my two sisters-in-law were pregnant, and I was covering three positions at work for people on maternity leaves. I really needed an escape because there was not a conversation I could have with family, friends at church, or at work that didn’t involve their lives moving forward when mine wasn’t in that area. I literally just sat down in the back room of our house with our computer on a card table and just started writing. I ran the emotions I was dealing with through the characters and wrote the book that I needed to read. Eventually, we adopted two girls from foster care and with our careers, life was busy, but I never let go of the book. Over the years friends and family read rough drafts and provided feedback.

Since publishing Treasure atop the Mountain in August 2019, I’ve met so many precious people. I love to hear when people are encouraged and relate to the message in the book. We all know fear, anger, and disappointment. And we all need reminded that we will feel joy again. Since I’ve written the second in the Treasure Series. Roxie Applesauce is on tour in March. The third in the series, Get Will, will launch in 2022. A series of children’s books will release in 2022.

For Him and My Family, February 13

Because I said so -- and other adventures in Parenting, February 17

Posted by Joan Nienhuis at 5:25 AM

Thank you for sharing your review of this book, I do like the cover and synopsis and I am looking forward to reading this story myself

Nice to meet you, Tonya, Treasure Atop the Mountain sounds like a great book and I like the cover! Good luck with your book and the tour! Thanks for sharing it with me! Thanks, Avid Reader for sharing your review! Have an awesome day!

Thanks for sharing, this sounds great

I'm adding to my tbr! Thanks for sharing!

I love this story. So glad to see it on your! Congratulations Tonya!

Sounds interesting. I appreciate your review .

Joan, Thank you so much for taking the time to read Treasure atop the Mountain and posting your review here and on Amazon!