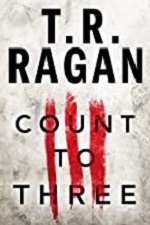 For a private investigator on the trail of a missing girl, every second counts in a gripping thriller by New York Times bestselling author T.R. Ragan.

On her first day of kindergarten, five-year-old Tinsley disappeared without a trace…

Five agonizing years later, her divorced mother, Dani Callahan, is a private investigator. She and Quinn Sullivan, a promising young assistant determined to prove herself, are devoted to helping others find missing loved ones. And for Dani, finding Tinsley is still a never-ending obsession.

Their newest case is Ali Cross, a teenager who vanished off a Sacramento street while walking home. A troubled boy’s eyewitness testimony to Ali’s abduction provides their only clues. And as their search for Ali gets underway, new information about Tinsley’s disappearance begins to surface too.

As their investigations lead down two twisting paths, disturbing secrets are revealed and new victims find themselves in mortal danger. Time is running out, and the hunt is only getting grimmer.

This is an intense novel of psychological suspense. It is a nail biting thriller. It is a well written page turner. Ragan has created believable characters in Dani and Quinn. They are both compelled to find missing people because of their own experiences. I liked them and their tenacious work in solving crimes.

Ragan has also done a good job creating a villain. He is truly evil but we do get some insight into why he has become the crazed person he is. Like with Dani and Quinn, Ragan has done a good job of developing the human experience behind the behavior.

The descriptions of the torture the villain inflicts on Ali may be too intense for gentle souls. While I found the narrative compelling, it was also quite gruesome. This novel is definitely not a cozy mystery. Readers with a potential sensitivity to female abduction and mistreatment might want to approach this novel with caution.

Theresa grew up in a family of five girls in Lafayette, California. An avid traveler, her wanderings have carried her to Germany, Ireland, the Netherlands, China, Thailand, and Nepal, where she narrowly survived being chased by a killer elephant. Before devoting herself to writing fiction, she worked as a legal secretary for a large corporation. Theresa and her husband Joe have four children and live in Sacramento, California.

I received a complimentary egalley of this book from the publisher. My comments are an independent and honest review. The rest of the copy of this post was provided.

Posted by Joan Nienhuis at 5:21 PM