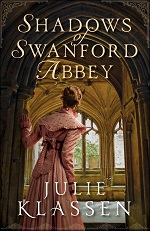 When Miss Rebecca Lane returns to her home village after a few years away, her brother begs for a favor: go to nearby Swanford Abbey and deliver his manuscript to an author staying there who could help him get published. Feeling responsible for her brother's desperate state, she reluctantly agrees.

The medieval monastery turned grand hotel is rumored to be haunted. Once there, Rebecca begins noticing strange things, including a figure in a hooded black gown gliding silently through the abbey's cloisters. For all its renovations and veneer of luxury, the ancient foundations seem to echo with whispers of the past--including her own. For there she encounters Sir Frederick--magistrate, widower, and former neighbor--who long ago broke her heart.

When the famous author is found murdered in the abbey, Sir Frederick begins questioning staff and guests and quickly discovers that several people held grudges against the man, including Miss Lane and her brother. Haunted by a painful betrayal in his past, Sir Frederick searches for answers but is torn between his growing feelings for Rebecca and his pursuit of the truth. For Miss Lane is clearly hiding something. . . .

This is a good novel for readers who love those set in Regency England. The setting is based on an actual abbey turned into a hotel. The murder does not happen until well into the story and I felt it played a reduced part of the overall narrative.

Besides the typical stumbling romance, there were several interesting aspects of the plot. One was book publishing. A character is trying to get a novel published and we see the difficulty in that happening and the possibility of plagiarism. Another issue was the process of law enforcement of the day. The process and people involved were quite different than what we see today. Another interesting issue was how mental illness was treated and the techniques of one innovative doctor.

There is a good message of forgiveness included as some of the characters must confront their own acts and the results they caused. The novel is good for readers who like to be immersed in the customs, culture, clothing, etc. of the era. Klassen does well in creating a good setting. The characters are well drawn and there is a surprising but welcome relationship twist at the end. A good novel for Regency romance readers who like a hint of a Gothic mystery included.

Julie Klassen loves all things Jane--Jane Eyre and Jane Austen. Her books have sold over a million copies, and she is a three-time recipient of the Christy Award for Historical Romance. The Secret of Pembrooke Park was honored with the Minnesota Book Award for Genre Fiction. Julie has also won the Midwest Book Award and Christian Retailing's BEST Award and has been a finalist in the RITA and Carol Awards. A graduate of the University of Illinois, Julie worked in publishing for sixteen years and now writes full time. She and her husband have two sons and live in a suburb of St. Paul, Minnesota. For more information, visit www.julieklassen.com. Photo © Farrow Media.

I received a complimentary copy of this book from the publisher. My comments are an independent and honest review. The book description and author biography were provided by the publisher.