The Seven-Day Resurrection by Chevron Ross 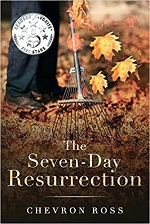 Seven years after his mother’s death, Len Holder awakens one morning to find her alive again. Impossible as it seems, Len must relive a strained relationship dating back to his father’s loss in World War II.

At seventy-eight, Len considers himself a failure. In his youth he was a struggling writer who settled for a series of office jobs to pay the bills. While his brother Joey became a famous sportscaster, Len took care of their aging mother. By day he works as a claims adjuster. At night he lives alone in his mother’s house, tinkering with a novel he can’t seem to finish.

Seven days pass as Mom resumes tormenting Len with old grievances. Meanwhile, other mysteries pile up. Len keeps hearing fragments of Joey’s radio show in his childhood bedroom. His sister reports disturbing phone calls from Mom. Strangers he meets look like people from his past. Other strangers have taken over his insurance office.

Then Len gets word that his beloved boss Miranda has been gravely injured in a traffic accident. Eventually, Miranda’s fate and a shocking secret from the past reveal that Sharon Holder’s resurrection is not what it seems to be.

The Seven-Day Resurrection is an intimate parable for senior citizens, and for any reader who has been thrust into the role of caregiver.

I found this novel to be an intriguing one although I thought it was somewhat puzzling until the very end. The basic plot line is interesting. A person back from the dead. One can imagine the opportunity it would offer to heal fractured relationships, right wrongs, make good on promises, etc. There was a little of that but I was surprised there was not more. Much of the narrative was reminiscing. I could see thinking back to mother/child experiences but I did not see the point of going through Len's troubled experiences with potential girlfriends.

There is also another plot within the major plot in that Len is a writer and we get to read sections of the novel he is writing. It was hard for me to keep the two plots in a cohesive relationship. Also, there is a great deal of going back in time to a scene or two and then back to current day, jumping around time wise.

The time structure was confusing. Some knew the mother had died and were shocked to see her alive again. Others acted as if seeing her was normal. A newspaper obituary said she died in 2020 but a tombstone said 2013. Len heard sports broadcasts from years ago even though a cell phone registered a current date. I felt as confused as Len must have felt.

It's a bit difficult to describe this novel. It is part magical realism, part fantasy, part a spiritual journey and part alternate history. The final scene does tie it all together and allow the reader to make sense of everything. The author is certainly imaginative and a clever writer. Having read this novel, I think there is great potential for future ones being created with spiritual insight and encouragement.

Chevron Ross is a pseudonym for someone unimportant. He is not a writer, but God keeps putting ideas into his head that somehow turn into stories. If you like them, be sure to offer God a prayer of thanks.

I received a complimentary digital copy of this book through Book Sirens. My comments are an independent and honest review. The rest of the copy of this post was from the author's website.

Posted by Joan Nienhuis at 6:42 AM