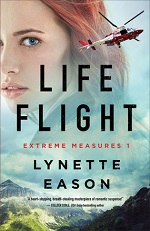 EMS helicopter pilot Penny Carlton is used to high-stress situations, but being forced to land on a mountain in a raging storm with a critical patient--and a serial killer on the loose--tests her skills and her nerve to the limit. She survives with FBI Special Agent Holt Satterfield's help. But she's not out of the woods yet.In the ensuing days, Penny finds herself under attack. And when news reaches Holt that he may not have gotten his man after all, it will take all he and Penny have to catch a killer--before the killer catches one of them.

This is another good romantic suspense from Eason. It starts out with a great suspenseful opening. Just when we think the action will settle down, we discover the evil villain is still very much in action. Part of the intensity of the plot is that the villain is after Penny, the heroine. She and our hero, FBI Agent Holt, have a history from previous events. Both of their back stories eventually come out but not in a timely manner. Since we get to know them well rather later in the novel, it was hard to find them engaging.

I had trouble liking Holt. He has a family situation he needs to come clean with Penny but he neglects to do so at every opportunity. An FBI Agent “frozen” by fear he might be rejected? I was also disappointed at Holt's lack of ingenuity in keeping Penny safe when it is so obvious the villain is smart and crafty in his attempts to get to her. I found it strange that a newspaper report had better ideas than the FBI. The lack of diligence on the FBI's part, letting Penny continue her helicopter work without adequate protection, led to much suspense. It's a pet peeve of mine when the villain doesn't have to work very hard to outwit law enforcement.

There is a side story involving Holt's sister. I am not sure that whole thing with the video worked out well. After all, the only fingerprints on the gun...

This new series is off to a relatively good start. The plot has plenty of suspense. It's a good novel for readers who love a great heroine and a valiant newspaper reporter and don't mind a somewhat inadequate FBI Agent.

Lynette Eason is the bestselling author of Life Flight and the Danger Never Sleeps, Blue Justice, Women of Justice, Deadly Reunions, Hidden Identity, and Elite Guardians series. She is the winner of three ACFW Carol Awards, the Selah Award, and the Inspirational Reader's Choice Award, among others. She is a graduate of the University of South Carolina and has a master's degree in education from Converse College. Eason lives in South Carolina with her husband and two children. Learn more at www.lynetteeason.com. Photo Credit: © Mary Denman

I received a complimentary egalley of this book from the author. My comments are an independent and honest review. The book summary and author biography were provided by the publisher.