A Book of Murder by Victoria Dowd 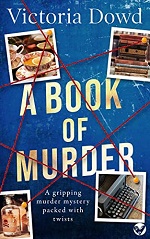 This is the first book I've read, the fourth in this series. While the mystery read well on its own, there were many references to events from previous novels having great impact on characters. There was much about the earlier death of Mirabelle. It was mentioned often, so often I wondered why Dowd did not do a better job of reviewing that death for readers of this novel. Something of such impact should have been clearly presented again for new readers and old readers who have lived life since the previous novel.

I liked the mystery plot. It's a kind of locked room murder where all the evidence points to a certain outcome and how could it possibly be any different? I liked how the murder technique was figured out but I am not so sure the essential clue had been given to us earlier. I did feel the outcome of the final suspenseful scene was a bit realistic. What happened every time in similar cases in the novel miraculously did not happen this time.

What I liked most in the novel was the interaction of the Smart women. There was snappy dialogue and good comebacks. The mother is something else. I also liked learning more about a poisonous fish and preparation techniques.

What I didn't like about the book is mostly because I came into the series late and did not feel there was enough background information. That is overshadowed by all I liked, the plot, the characters and the writing style. I'll be looking for more from this author.

After graduating from Cambridge, Victoria was a criminal law barrister on the London circuit for many years, where many of her cases were much stranger than fiction.

Victoria is now an award winning writer, having won the Go Gothic Short Story Award for 2019. She has had short fiction published in places such as Aesthetica: A Review of Contemporary Artists and was chosen as the runner up in The New Writer’s writer of the year award. Her work was Highly Commended by The Writers’ Forum and long-listed for The Willesden Herald International Short Story Competition. She has had short stories published in the BTS Literary and Arts Annual, Dream Catcher arts journal and Gold Dust Literary Magazine.

Victoria lives with her husband and two children. She writes full time, splitting her time between London and Devon, where she can indulge her passion for all things Agatha Christie. You can find out more at https://victoriadowd.com/.

Posted by Joan Nienhuis at 9:28 AM