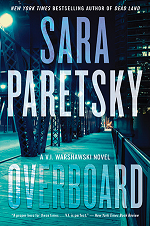 On her way home from an all-night surveillance job, V. I. Warshawski is led by her dogs on a mad chase that ends when they discover a badly injured teen hiding in the rocks along Lake Michigan. The girl only regains consciousness long enough to utter one enigmatic word. V. I. helps bring her to a hospital, but not long after, she vanishes before anyone can discover her identity. As V. I. attempts to find her, the detective uncovers an ugly consortium of Chicago power brokers and mobsters who are prepared to kill the girl. And then V. I.'s own life is in jeopardy as well.

I like this action packed novel. While it had been a while since I read a Paretsky novel, Warshawski is as gutsy as I remember her. It took a while for the plot to get set up but then it continued at a good pace. Two aspects of the plot struck me. One was how much of it came from Warshawski's childhood. Feuding family relationships are huge in this novel and Warshawski is in the middle of them. The other aspect was corruption in the Chicago Police Department. There are powerful people who have a great deal of influence on police action. And some of the policemen are violent bullies. It was disappointing and made me glad I don't live in Chicago.

Paretsky has crafted another engaging novel with the tenacious private investigator who always gets to the bottom of the problem. Warshawski really gets a beating in this novel. I hope Paretsky's scenes of police violence are truly fiction. I liked that she included pandemic era actions like wearing masks and trying to social distance. There's lots going on in this novel, at least a couple of plot lines. I did feel the Jewish synagogue issue was left hanging. Nonetheless, a good novel of action and suspense.

Sara Paretsky is the New York Times bestselling author of twenty-three novels, including the renowned V. I. Warshawski series. She is one of only four living writers to have received both the Grand Master Award form the Mystery Writers of America and the Cartier Diamond Dagger from the Crime Writers' Association of Great Britain. She lives in Chicago.
William Morrow, 400 pages.
I received a complimentary egalley of this book from the publisher. My comments are an independent and honest review.

Posted by Joan Nienhuis at 3:59 PM