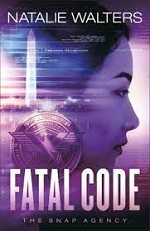 In 1964, a group of scientists called the Los Alamos Five came close to finishing a nuclear energy project for the United States government when they were abruptly disbanded. Now the granddaughter of one of those five scientists, aerospace engineer Elinor Mitchell, discovers that she has highly sensitive information on the project in her possession – and a target on her back.

SNAP agent and former Navy cryptologist Kekoa Young is tasked with monitoring Elinor. This is both convenient since she's his neighbor in Washington, DC and decidedly inconvenient because . . . well, he kind of likes her.

As Elinor follows the clues her grandfather left behind to a top-secret nuclear project. Kekoa has no choice but to step in. When Elinor learns he has been spying on her, she's crushed. But with danger closing in on all sides, she'll have to trust him to ensure her discoveries stay out of enemy hands.

Natalie Walters sucks you into the global race for space domination in this perfectly paced second installment of her SNAP Agency romantic suspense series.

This is the second novel in the SNAP series but reads well on its own. I have mixed emotions on this novel. There is a good deal of suspense and there is a suitable romance. I liked learning about codes and ciphers.

The plot is a bit complex and perhaps not as focused as I'd like. Someone wants secret plans or is it codes? Is it from a generation ago or is it from a project today? In the end, the villain structure was just as unfocused and complex. A pet peeve of mine is suspense because of lack of astute action on the part of the good guys. That happens in this novel when Elinor goes to a restroom unaccompanied. I knew suspense would ensue and, of course, it did.

It seemed to me the behavior of the team members toward each other was odd. A great deal of teasing goes on and there is sassy talk. It did not seem very professional to me. Another odd part of the SNAP operation is that the leader gave Kekoa responsibility to investigate and subsequently protect Elinor. The latter was totally out of his ability and it showed. And one other problem concerned Kekoa's belief Elinor was not responsible even though her computer was used. No one thought to ask her if her login identity card had gone missing recently?

While I have some issues with the plot and the behavior of some of the characters, this was generally an enjoyable romantic suspense.

You can read my review of the first novel in the SNAP Agency series, Lights Out.

Natalie Walters is the author of the Harbored Secrets series. A military wife, she lives in Texas with her soldier husband and their three children. She loves traveling, spending time with her family, and connecting with her readers. You can find out more at www.nataliewalterswriter.com. Photo: Emily Hendryx Haney

I received a complimentary egalley of this book from the Publisher. My comments are an independent and honest review. The rest of the copy of this post is from publisher information.

Posted by Joan Nienhuis at 1:50 PM