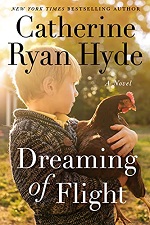 The story revolved around Stewie, an eleven year old boy, meeting Marilyn, a grouchy woman who reminds Stewie of the grandmother who had recently died. They form an unusual relationship. That relationship doesn't move much in the first half of the book but blossoms into life lessons in the second half. Stewie puzzled me. Though a very nice and polite boy, he acted much younger than is age. I would have thought him on the spectrum but we are never told that. Marilyn hides a secret. We get hints as to this secret and when the truth bursts on the scene half way through the book, that's when the book became interesting to me.

There are a number of good life lessons explored in the second half of the book. Stewie has to learn that he cannot fix everyone's problem, for example. We also get good examples of what is possible when people are encouraged to see if they can get along just a little bit better. The lessons culminate at the end of the novel, an expected ending, one you just knew was coming, yet emotionally rewarding.

Catherine Ryan Hyde is the author of more than forty books. She is an avid hiker, traveler, equestrian, and amateur photographer. Her novel, Pay It Forward, was adapted into a major motion picture. You can find out more at https://www.catherineryanhyde.com/.