Dead Against Her by Melinda Leigh 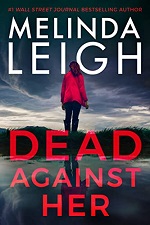 This is the first book I have read in this series and I liked it. There is enough background that I felt it read well on its own. I like the heroine, Bree, a gutsy sheriff. Appointed to her position, she has to frequently defend herself and her actions, especially when a previous corrupt deputy she forced to resign is found murdered.

In addition to solving a murder, Bree must deal with harassment in the form of fake pornographic photos let loose on the internet. Though easily proven fake, some gleefully promote them, hoping to force Bree to resign. That use of fake media could be right out of today's headlines.

I like Leigh's writing style. The action is nearly continuous as the plot moves along at a good speed. There is a bit of suspense near the end too. The character development is done well with a good balance of action in the plot and Bree's personal life.

I was pleasantly surprised by the quality of a novel from a prolific author. I will be looking for more from her.

Melinda Leigh is a fully recovered banker. A bestselling author, she began writing as a way to preserve her sanity while raising her kids. She found she enjoyed writing more than analyzing financial statements and decided to turn her hobby into a career. Her debut novel, She Can Run, was nominated for Best First Novel by the International Thriller Writers. She has received several awards, including two Silver Falchions and three Golden Leaf Awards. She is a two-time RITA Award finalist and has earned three Daphne du Maurier Award nominations. Her books have sold over 11 million copies. She lives near the beach with her family and a herd of spoiled rescue pets. You can find out more at https://melindaleigh.com/.

Posted by Joan Nienhuis at 6:28 AM