Who Can Hold the Sea by James D Hornfischer 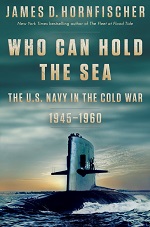 This landmark account of the U.S. Navy in the Cold War, Who Can Hold the Sea combines narrative history with scenes of stirring adventure on—and under—the high seas. In 1945, at the end of World War II, the victorious Navy sends its sailors home and decommissions most of its warships. But this peaceful interlude is short-lived, as Stalin, America’s former ally, makes aggressive moves in Europe and the Far East. Winston Churchill crystallizes the growing Communist threat by declaring the existence of “the Iron Curtain,” and the Truman Doctrine is set up to contain Communism by establishing U.S. military bases throughout the world.

Set against this background of increasing Cold War hostility, Who Can Hold the Sea paints the dramatic rise of the Navy’s crucial postwar role in a series of exciting episodes that include the controversial tests of the A-bombs that were dropped on warships at Bikini Island; the invention of sonar and the developing science of undersea warfare; the Navy’s leading part in key battles of the Korean War; the dramatic sinking of the submarine USS Cochino in the Norwegian Sea; the invention of the nuclear submarine and the dangerous, first-ever cruise of the USS Nautilus under the North Pole; and the growth of the modern Navy with technological breakthroughs such as massive aircraft carriers, and cruisers fitted with surface-to-air missiles.

As in all of Hornfischer’s works, the events unfold in riveting detail. The story of the Cold War at sea is ultimately the story of America’s victorious contest to protect the free world.

Why would someone be interested in reading a detailed history of naval operations the decade after WW II? Because, writes Hornfischer, “the geopolitics of the U.S. has been driven by maritime realities more than by any other force.” (214/6806) Much of the book deals with the rivalry between the U.S. Navy and the Soviet Union. It was only at sea, Hornfischer says, that the U.S. was superior to Moscow. (1900/6806)

This is a great book for history buffs but would also be of interest to those who want to understand the current relationships between major nations. Many of the nations currently allied in causes formed those alliances as a result of WW II. Hornfischer's description of the developing situation in the USSR after WW II sounds much like what is happening today. I now understand how the concept developed that the U.S. should be responsible for the security of all mankind, the force needed to secure the freedom of the world. (1578/6806)

Hornfischer writes well. What could be boring history is brought alive under his pen. I was caught up in his engaging account of the fire in the sub USS Cochino and the rescue action. The strange events around the death of Forrestal reads like a mystery novel. I had read about the testing of atomic bombs by Bikini but learned a great deal about how and why it was done. So much about radioactivity was unknown at the time great lengths were taken to understand its effects. We are taken through the Korean War, the Suez Canal crisis, the development of missiles, and the engaging trip of the USS Nautilus under the ice of the North Pole on its second attempt.

This book is well written and interesting. I appreciate the information contained, presented in a readable way.

James D. Hornfischer was a writer, literary agent, and book editor. He was the author of the New York Times bestsellers Neptune’s Inferno, The Last Stand of the Tin Can Soldiers, Ship of Ghosts, and The Fleet at Flood Tide, all widely acclaimed accounts of the U.S. Navy in the Pacific during World War II, as well as the upcoming Who Can Hold the Sea. His books have received numerous awards, including the Samuel Eliot Morison Award for Distinguished Service and the Naval Historical Foundation Distinguished Service Award. James D. Hornfischer died in 2021. Photo by Mark Matson

Posted by Joan Nienhuis at 6:42 AM