Pedersen wrote and self published a series of mysteries, most taking place on Whidbey Island. Born on Whidbey and still living on the island, I am embarrassed to say I had not read any of the mysteries until recently, for a reading group discussion. I was familiar with Pedersen from his writing about local birds, a book about Whidbey Island, and his contribution to a book on island shore hikes, Getting to the Water's Edge. 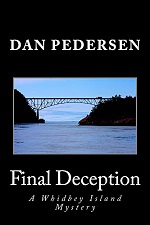 Final Deception is the first Whidbey Island Mystery. It begins with a graphic description of a fall from Deception Pass Bridge. Most assume the Bella's death was suicide. Brad and a friend fly to Whidbey to attend the memorial get together. Having known Bella years ago, they are not so sure her death was not murder. A sheriff's deputy wonders too.

Pedersen wrote novels to entertain but also to get people thinking about social and personal issues. This novel centers on the noisy Growler jets at NAS Whidbey Island, the noisiest since the base was built during WW II. Some think the noise harms themselves, animals, and the environment. Others think the presence of the navy on the island is saving the economy and business. Bella was of a strong opinion. “Noise was the price islanders paid for selling their souls...” (56) 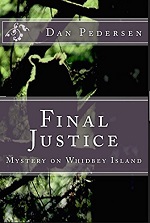 Final Justice is the fourth in the series but the next to take place on Whidbey. It features characters from previous novels and is best read after the earlier ones, including those set elsewhere. The plot in this mystery is based on an event from 1984. A white supremacist group had a compound on Whidbey at the time. The leader was killed when the FBI raided the group. (You can read about that event here.) In the present time, it appears another group on Whidbey may have terrorist ideas. A woman is missing and may be held captive by the terrorist group.

Pedersen wrote this novel during the Trump administration and many characters feel free to express their displeasure with the man. It was suggested the rise in home grown terrorism was directly related to the President's rhetoric. This novel was written in the present tense, unlike the earlier one I read. I did not find that writing style pleasant.

Pedersen was one who loved the birds of Whidbey and readers will find references to many. He has done a great job showing off the beauty of Whidbey. He also gives interesting historical facts about places on Whidbey. Who knew Billy Sunday once came to the island, speaking at Maxwelton? Anyone who would like an introduction to the beauty of the island and the flavor of the various communities would do well to read Pedersen's mysteries.

Pedersen's books were self published and could have used a bit more editing. I often noted missing punctuation, as did previous readers of the library books, penciling in what was missing. The printed editions I read had plenty of white space and could be considered more novellas than actual full length novels. The mysteries are decently plotted. I liked the novels well enough that I have already purchased the next one set on Whidbey.

Dan Pedersen (1947-2021) was born in Mount Vernon, WA, and moved to Whidbey Island in 1986. He received a master's degree in journalism from the University of Washington. He served in the Air Force during the Vietnam era, including time at Mountain Home, Idaho. He then worked for a number of newspapers. Most of his career centered on a marketing magazine, and a newsletter and many annual reports for Safeco Corporation. He retired from a corporate career in 2002, writing material for Island County Marine Resources Committee. He wrote a blog and self published several books on family history and rural living and began a mystery series. There are ten mysteries in all, many taking place on Whidbey Island. You can read past contributions to Pedersen's informative blog here. You can read more about his career and a tribute to him here.

Posted by Joan Nienhuis at 2:20 PM